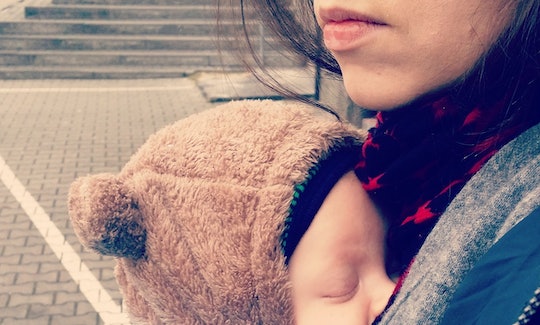 Yes, You Can Be Tired AF With *Only* One Kid

Ha ha ha, remember when everyone told you that the first 12 weeks — the so-called "fourth trimester" — were the toughest, and after that, it got easier? For whatever reason, I assumed that six months would be the magic number for when I came out of the woods from the newborn phase and my life returned to normal. Now, of course, I know there is no returning to normal. I am tired AF and — disclosure — I only have one kid, supposedly much easier than two.

Deep down, I have always been "team one and done" when it came to having children. I'm not sure why, but one just always seemed like enough for me. And boy, was I right. I had anticipated the difficulties associated with adjusting to parenthood — the sleepless nights, the constant worrying, the death of my social life. But what I thought of being a mom before having a child was not even close to what being a parent is really like. Before becoming a mom, I assumed that the first few weeks would be the hardest and everything would progressively get better. Now I know that they are just the sort of frypan you pass through on the way to a much hotter fire.

You'd think people are familiar with the idea that having children is exhausting as hell, but the reaction I keep getting is that I'm off my rocker for being tired with ~only~ one kid.

I thought I could handle the demands of motherhood easily because, before I became a mother, I had a demanding job as a daycare owner. And even though I worked 10-12 hours a day, and juggled multiple children at once, I still had enough time to relax, go out, take long showers, clean, cook, and sleep in late if I felt like it on the weekends.

People without children are baffled that I’m busy with one child. Everyone seems to think having one child is a walk in the park, but for me, it’s a rollercoaster.

But looking after multiple kids all day didn’t prepare me for the 24/7 job of being a mom. My daughter is 18 months old and sleep is still a luxury I don't often get to enjoy. I'm always tired and behind on chores. Dishes and laundry have quadrupled and there's always a mess to clean up, always. I barely get a moment to sit down and sometimes I don't even get time to eat or shower. But, that's motherhood in a nutshell. It's a narrative we've heard time and time again. Being a mom is hard AF. But lately I've noticed that when I admit how tired and busy I am, moms with more than one child think I have no right to feel this way.

When I became a mom, I was excited to join the "mom club." And when motherhood hit me like a ton of bricks, I was in dire need of emotional support. I assumed, when I bumped into other moms at parks, social gatherings, or wherever moms congregate, that I would be able to unload, complain, and exchange stories of the joys and chaos that come along with motherhood.

But almost immediately, I soon learned, I had just hit the tip of the iceberg. I was just a mother of one. What was all of the fuss about? Instead of heads nodding in agreement or instead of hearing things like "I know what you mean" it sometimes felt like I had stuck my foot in my mouth. I heard "you only have one kid!"

People without children are baffled that I’m busy with one child. Everyone seems to think having one child is a walk in the park, but for me, it’s a rollercoaster.

Sure, I met moms that I could relate to, but they were few and far in between. It was more common for me to find a mom that jerked her head to the side as I complained instead of being understanding. They were kind of shocked that I couldn't keep it together. After all I just had one kid. Some even bragged that they had two or three kids and somehow cooked, cleaned, and held down a full-time job. And here I was, a stay-at-home mother of one, just one, and I couldn't get it together enough to remember to eat some days. I was that mom that forgot laundry in the washing machine and woke up to a clothes that smelled like mildew. I was that mom that put a milk carton in the cabinet instead of back in the fridge or put my cell phone in the freezer.

Though I'm just a mother of one, I'm still a mother. And like I've said, being a mom is hard AF.

With just one kid, I'm still not able to cook over-the-top dinners like I used to almost a year and a half in. Most nights I whip up grilled cheeses. Sometimes I microwave sh*t. With *just* one kid, I sometimes feel like every bone in my body is broken and I feel like I will fall a part. And you know what? I have every right to feel this way. Now I‘m not saying moms with multiple children don’t have a lot on their plates, I’m saying we all do. Just like all moms, I get interrupted when I'm trying to get anything done like cooking or cleaning. I now have company every where I go, even in the bathroom.

I'm constantly screaming "No, don't do that!" every five minutes. My daughter is super active. She's always on the go. I'm constantly juggling entertaining her, cooking, cleaning, and keeping the house as together as I can, all while trying to trick her into eating broccoli. I don't have a lot of help, and most days I feel the weight of the world on my shoulders. Though I'm just a mother of one, I'm still a mother. And like I've said, being a mom is hard AF.

So, before you make that joke about a mom being tired with just one kid, yeah it's absolutely possible. Let's be clear, every mom has some odds stacked against her in some way. I don't have a "village" or even an understaffed outpost of help. Some moms struggle with demanding jobs others have a hard time making ends meet. Some moms have children with special needs. Whatever the case, we're all just trying to do our best. It's not a competition, it's definitely not a race. I know some mothers have it way harder than I do, and I'm not asking for a pat on the back. But just because I'm a stay-at-home mom of only one, it doesn't mean that everything is easier for me.

More Like This
I’m A Mom Who Will Never Own A Home
Home Reno Culture Makes Me Feel Like I Live In A "Before" House
I’m Getting Dual Citizenship For My Jewish Children, Just In Case.
If Breastfeeding Makes You Tired, Here’s How To Keep Your Energy Up