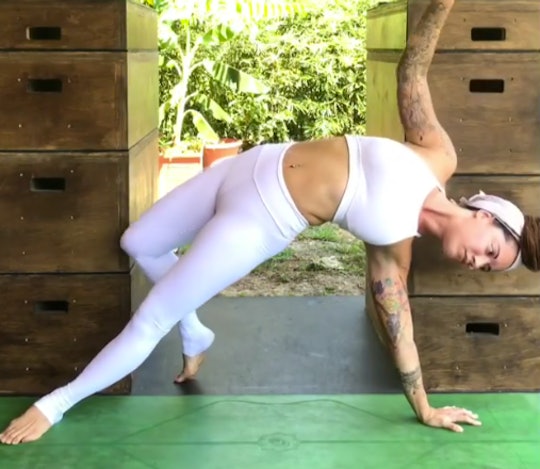 This Yoga Teacher Is Getting Real About Periods

During "that time of the month," many women fervently hope that they won't spring a noticeable leak. Recently, though, some ladies have been trying to raise awareness that there's another way to go with the flow. Now, a yoga instructor who had a period leak is making headlines for being anything but shy about the stain on her leggings, and a video about her leak is helping women start conversations about their own bodies, and the shame surrounding their menstrual cycles that they've been taught to feel.

Yoga instructor Steph Gongora posted a video on Instagram last week in which she went through a series of complicated, awe-inspiring yoga moves with a little something extra — a conspicuous spot of red on her white yoga pants. She posted a long caption about her leak, writing,

I am a woman, therefore, I bleed. It’s messy, it’s painful, it’s terrible and it’s beautiful. And yet, you wouldn’t know. Because I hide it. I bury things at the bottom of the trash. I breathe, ragged and awkward through the cramps, all the while holding onto this tight-lipped, painted-on smile... [H]undreds of years of culture have made us embarrassed to bleed. Have left us feeling dirty and ashamed. . STOP PRETENDING. Stop using silly pet names like Aunt Flo because you're too afraid to say "I'm bleeding" or "vagina." Stop wasting so much effort hiding the very thing that gives this species continuity. . START talking about it.

It's a brave, eye-catching way to start a very important conversation. Almost every woman has some "shameful" period story, where they were somehow humiliated while doing the thing that half the world's population does so that human life can carry on. (Mine: the day in middle school that I walked around town with a blood spot on my khaki shorts for who knows how long before realizing it.)

And in many places, the shame goes even further. As Gongora pointed out, many women around the world "miss school or work for lack of adequate menstrual supplies, & fear of what might happen if the world witnesses A NATURAL BODILY FUNCTION." Some women are even banished to menstrual huts during their periods, because they have been deemed "unclean." Recently, a 15-year-old girl in Nepal died in her menstrual hut while trying to keep warm.

So it's promising to see Gongora's post getting so much attention. (A quick clarification she emailed Romper, given that some other outlets have reported it as intentional free-bleeding — the leak wasn't intentional. Posting it to Instagram to say "screw you" to shame was.)

Let's hope that we can have more stories like hers, or like Kiran Ghandi's, who ran a marathon while free bleeding, or like the one about the stigma-reducing "period party" one mom threw her daughter for her first period. Here's to not being ashamed about the fact that our bodies have the capacity to create life.