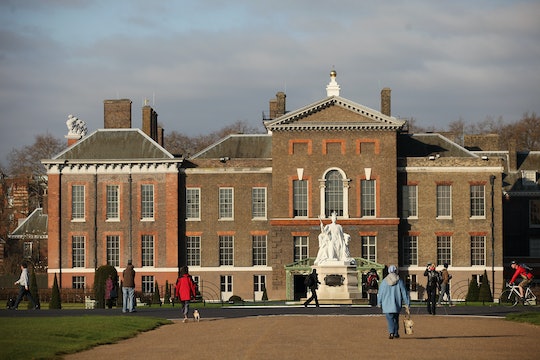 You Can Get Married At This Royal Residence, So Dust Off Your Tiara

In the category of things you never considered could possibly be true, you can apparently rent out space at one of London's most famous royal castles for your big day — or any occasion you so desire. As Marie Claire reported, you can actually get married at Kensington Palace, but remember, it's B.Y.O.P — bring your own prince.

You see, Kensington Palace is, at it turns out, pretty darn big. Big enough so that it's not like your pad or mine... you know, kitchen, family, room, dining room a couple bedrooms, a bath or two, and you're done.

No, on the contrary, it's a ginormous structure with huge grounds that has been owned by the British monarchy since the 17th century, according to Vogue magazine.

Of course, no matter who you are, or how special your occasion, you can't expect to throw your shindig at Kate's place. But don't worry, there is more than enough room right there on the grounds to throw a large party — such as a wedding — for up to 1,000 guests, Marie Claire reported. (And hey, if you run into a royal on the way to the loo, that's just a bonus, though definitely unlikely).

Looking at the official website, HistoricRoyalPalaces.org, it's indeed there in black and white: Rent out Kensington Palace for the night and you can put "Kensington Palace, Kensington Gardens, London W8 4PX" on your wedding invitation. Cool.

"Whether it is the glorious Orangery, immaculate palace gardens, or wondrous state rooms, the romance of Kensington Palace promises you and your guests an unforgettable atmosphere – and a day forever remembered," the palace's online brochure reads.

The brochure goes on to explain that Kensington Palace staff will also help you with all of your wedding-planning needs, from caterers to florists, and offers such spaces as the King's Gallery with accommodations to seat 100 for dinner.

For a more intimate reception, the Cupola Room, the location of Queen Victoria's baptism, can seat 80 for dinner and includes a spectacular trompe l’oeil painted ceiling that creates the illusion of the room being a gilded dome.

For those who demand only the best, the clear choice is the Orangery, a greenhouse and terrace designed in 1704 for Queen Anne, created by famous architects including Christopher Wren, designer of London's St. Paul's Cathedral, as Business Insider noted.

As a matter of fact, that's where Nicky Hilton and James Rothschild got married in 2015, as People noted.

I'm totally sold on Kensington Palace as the wedding venue of the century... except there is the teeny, tiny matter of cost.

It's only gonna run $23,100 to book it during the day on a Saturday or Sunday, according to E! News. (And the cost includes a wedding planner, transportation, cleaning, on-site security, and a private entrance to the palace for your guests.)

I mean, what's money when you can breathe in the same rarified air that Princess Diana (who lived at the palace even after her divorce, according to Vogue) or Queen Victoria, (who was born and raised there, according to House Beautiful) did?

I say, go for it! And please, please, send me an invite.