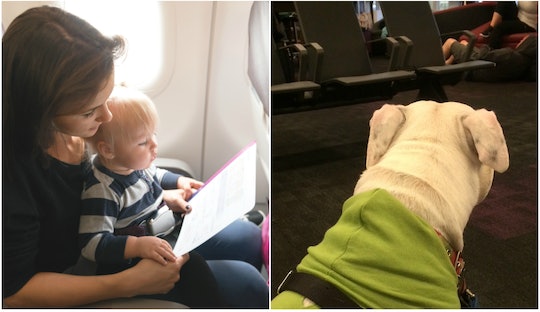 You Can Call Them Your Fur Babies, But Don't Bring Them On The Plane

I’m not mad when people call pets their "fur babies." I’m not mad their golden doodles look better in antlers than my kid. I’m not even mad that my brother-in-law wasted the best West Wing baby name on the dog he later had to give away, ending my dreams of being mother to a little Toby Ziegler Manley. But when people disguise their pets as fake service animals to fly bulkhead on planes, out come my scissor hands.

I have a pet, and he is a special part of our family.* Crating him was, TBH, quite a bit like doing cry-it-out with a baby. I use treats to bribe both my children and my dog. And I have reared my children on the “loose leash” method. I haven’t tried using a whistle or clicker to train my kids yet, but look, I’m leaving that door open.

I have driven cross-country with my dog, stopping every four hours to let him run around the ashen gardens of Cum ‘n Gos, and I know what it’s like to find your road-trip odyssey has been tainted by dog butt just 30 minutes down the highway. It does seem a lot easier to just pop your dog at your feet for a quick jet across the country. And I understand that *some* dogs do perform important service tasks like sniffing for spikes in the salinity of sweat ahead of a seizure, or guiding blind owners. Emotional service animals (ESAs) are a real thing. But I’ve also flown around the world with tiny kids, and I have no time for a fake service animal next to me in bulkhead as I try to jam my infant into a bassinet so my boobs can get a rest for 10 minutes.

Babies hate these fold-down bassinets; it must feel like you’re putting them in a garbage pod, about to blast them out into space. But when your other option is nursing for five or eight or 14 hours straight, the extra space is a gift. This is why I don't want to share. There have been reports of faux service animals in little neon vests purchased on the internet snapping at people and children on planes. In June, a combat veteran's emotional support animal attacked a passenger on a Delta flight. There have been documented incidences of dogs pooping in the aisle and generally going bananas because flying sucks, even before they take away the complimentary sandwiches or an excitable flight attendant thwacks you in the head with your collapsible stroller.

My friend recently transported his admittedly very cute pup from LAX to JFK with an ESA certificate and green hoodie. The second he entered the airport, his dog excitedly barked at another pair of ESAs just politely sniffing the tile. The dog, which at 60 or 70 pounds is larger than most kindergarteners, traveled well on a makeshift bed of pillows. Apparently, he even made some friends on the plane. Still, my friend was rethinking the ruse.

Would I do what I could to avoid placing my fur baby in the cargo hold? Yes, look, I would. But for now, as a person schlepping two tiny humans about the world on my airplane ticket — one as a lap infant — I'm playing the "human parent" card. I want extra free crayons and no dogs.

If you have acquired a fake service animal designation for your basset hound, or turtle, or bunny, I am urging you to rethink it.

This is a real thing. A few years ago, New Yorker writer Patricia Marx wanted to see how far she could push the line, and managed to bring a pig on a plane, and an alpaca to an art gallery:

While the alpaca stood, perfectly behaved, in the gift shop among hand-painted porcelain tiles, glass vases, and antique lanterns, and I fielded questions from shoppers

Well played, Patricia Marx, well played. But if I ever see an alpaca seated next to me in row 22, I'm going to scream. It’s bad enough that Toby Ziegler will never call me “mom,” heaven help him if he bites my kid.

*Heavy asterisk for him after snapping at my kids.

More Like This
I’m A Mom Who Will Never Own A Home
Home Reno Culture Makes Me Feel Like I Live In A "Before" House
I’m Getting Dual Citizenship For My Jewish Children, Just In Case.
This Is What It’s Like To Parent With OCD Right Now