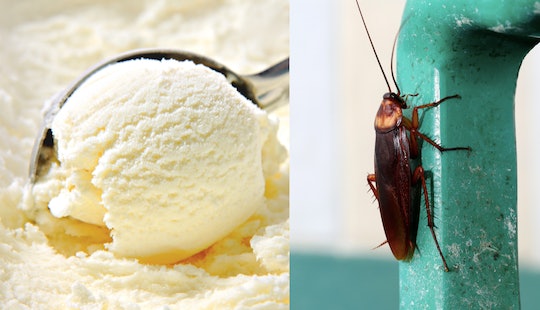 If You Thought Breast Milk Ice Cream Was Creepy, Cockroach Ice Cream Will Ruin Your Day

Growing up in New York City, there's one thing that's undeniably true: Cockroaches are everywhere. It doesn't matter how immaculate you keep your home, a roach will pop up out of your sink while you're washing dishes, chilling in the basin like it pays rent. I, for one, find cockroaches to be gross nuisances (#sorrynotsorry, bug people), which is why I don't, for the life of me, understand why you can officially drink cockroach milk. Seriously, someone explain this to me as if I am infant and can only understand baby talk, because this is nonsense.

Cockroach milk is not a new thing, apparently. Back in 2016, researchers from the Institute for Stem Cell Biology Regenerative Medicine in India found that a milk-like substance from the Pacific beetle cockroach is rich in protein-infused crystals that has three times the energy of what's found in regular dairy milk, according to CBS news. And these crystals are "like a complete food," Sanchari Banerjee, one of the lead researchers, told Times of India, CBS News reported.

"They have proteins, fats, and sugars. If you look into the protein sequences, they have all the essential amino acids," Banerjee continued, according to CBS News.

But it wasn't until recently — in fact, just last week — that people began to bill cockroach milk as a "superfood" and "the next big food trend." That's because Gourmet Grubb, a food company based out of South Africa, started selling ice cream made with cockroach milk, according to BGR. Gourmet Grubb is not the only business to cash in on the roach milk craze (why is it a craze, again?), but it seems to be getting the most attention, at least from what I can glean from news reports.

The company wrote of its bug milk, which is made from a very specific species native to Hawaii, according to BGR:

The milk is made from sustainably farmed insects. Needless to say, this is considered to be significantly more environmentally friendly than the traditional farming of dairy cows. One of the most pivotal benefits of entomilk is that it has a high protein content and is rich in mineral such as iron, zinc, and calcium.”

Three different ice cream flavours. Good because they are all environmentally friendly, made from a sustainable source and full of protein and minerals. Gourmet Grubb is changing the way you think about healthy, delicious, alternative food.

Not everyone is buying what cockroach milk is selling, though. Despite that one 2016 study, science has yet to prove that roach milk is safe to consume, according to Prevention. Keri Gans, author of The Small Change Diet, told Prevention:

When we drink milk from cows, it goes through pasteurization for safety. I question the safety of cockroach milk for human consumption.

What's more: Gans said that the protein-rich crystals found in the Pacific beetle are high in calories, according to Prevention — too high, actually. Gans told the magazine:

Call me boring, but I am not adventurous enough to taste the nectar of a cockroach in order to receive vital nutrients — nor would I want to consume that many calories from an 8-ounce cup. I'll stick with my lactose-free milk and turkey burgers, thank you very much.