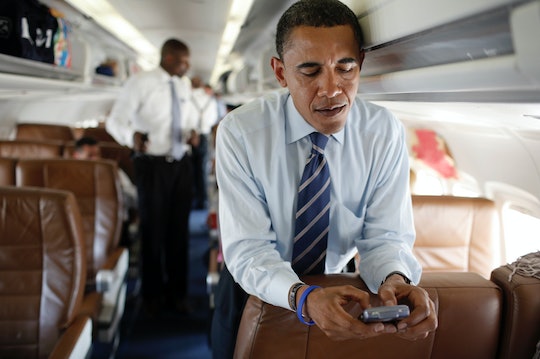 It isn't every day that a former president tweets out his phone number, which is why people took notice Wednesday when the 44th president of the United States asked people to text him. That's right, you can text former President Barack Obama. In fact, he's particularly keen on hearing how you plan to vote in the 2020 presidential election.

"All right, let's try something new," the former president tweeted Wednesday. "If you're in the United States, send me a text at 773-365-9687 — I want to hear how you're doing, what's on your mind, and how you're planning on voting this year. I'll be in touch from time to time to share what's on my mind, too."

Of course, this isn't Obama's personal cell phone number. Rather, it's his number on Community, a text message-based communication platform that has recently become popular with celebrities, politicians, and artists looking to connect more directly with fans.

According to Fast Company, Obama has joined Community in an effort to leave no (social media) stone unturned in his efforts to virtually campaign for 2020 Democratic nominee Joe Biden. "President Obama has said this is an all-hands-on-deck moment, so we are going to use every tactic we can find to mobilize voters," Eric Schultz, a former deputy White House press secretary under the Obama administration, told the news outlet. "We've always been driven by a strategy of finding audiences where they are at, so of course, in this particular moment, we are going to now reach people in the palms of their hands."

Obama appears to be the first major political figure to join Community, and it's unclear if voters should expect to see Biden or President Donald Trump hop on the platform in the run up to Election Day. By design — Community doesn't filter messages based on an algorithm — the text message-based platform may be the perfect place for politicians eager to hit the virtual campaign trail. According to Fast Company, the platform enables its notable users (aka those given numbers) to communicate directly with users and even sort or filter those users by geography and demographic. Meaning Obama can text about child care exclusively with the working moms in his group and about climate change with the young people following him.

While Obama's fellow politicians may not be on Community just yet, the former president is in good company. Kerry Washington, Paul McCartney, Reese Witherspoon, John Legend, Amy Schumer, and Jennifer Lopez are all reported by People to be on Community.

Still, be aware that you're not exactly "texting" with Obama or other celebrities when you reach out to them via their Community numbers. The service, although disguised as texting, is akin to subscribing to automated updates or newsletters delivered via text.