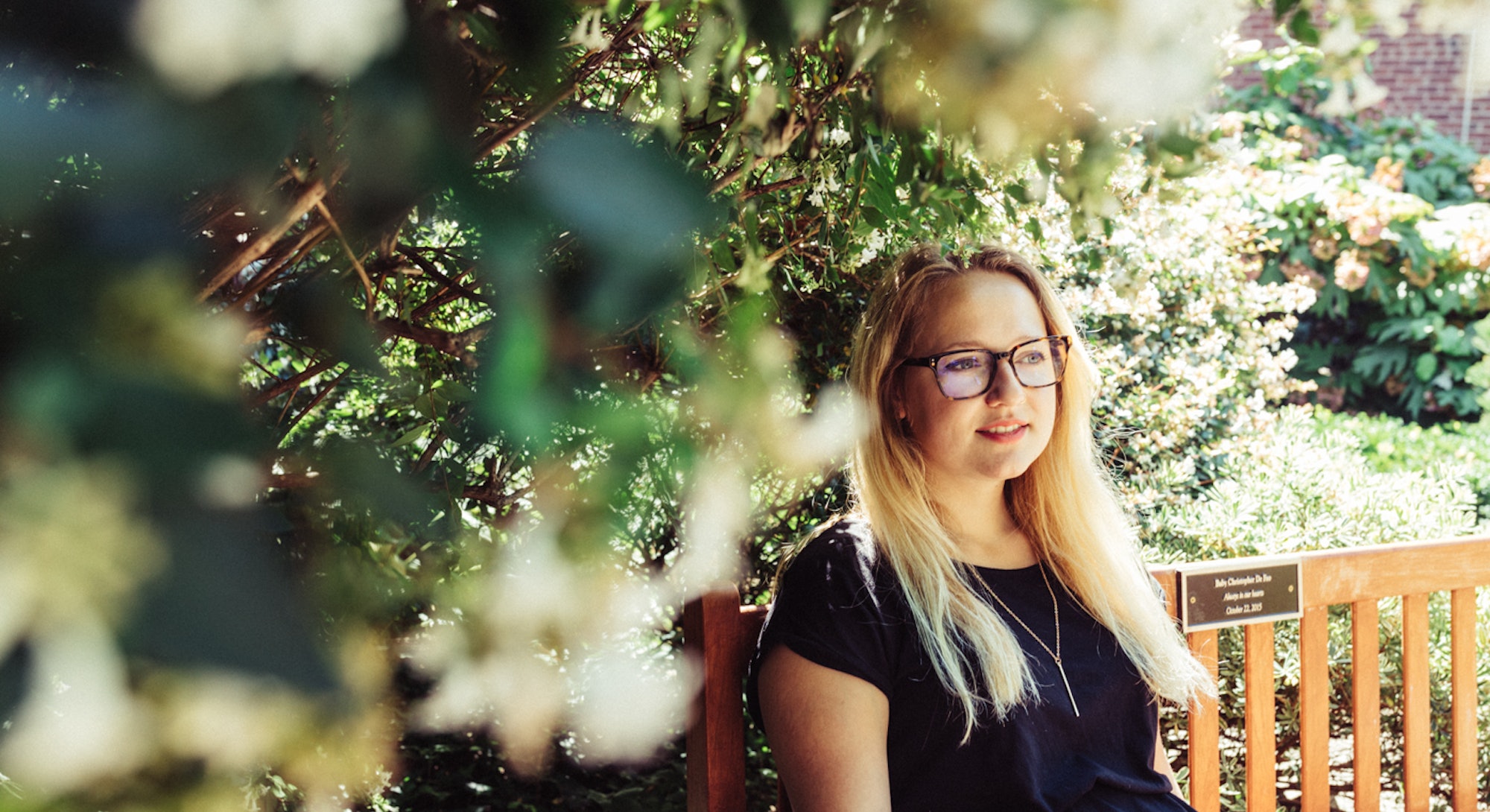 You Can't See My Child

Jessica Jenkins, 22, lives in Jersey City. My conversation with Jessica is so fundamentally different than all of the other interviews for this series. We talk about her birth story and how she came to know about her son Dustin’s genetic mutation, but not in the same way as I have with the other mothers. Jessica’s son is deceased. If he were still alive he would have just turned 3. He died last September at age 2.

She tells me a lot about Dustin's health challenges, the things she learned to do for him as his mother, and how she confronts life without him. Jessica says that the biggest parenting decision she had to make for Dustin was to let him go.

When he was 3 months old, my son, Dustin, was diagnosed with SCN8A Epilepsy. That meant that there was a mutation in that specific gene, SCN8A, [that regulates] a sodium channel in his brain. People who suffer from this can have have seizures as well as mild to severe developmental delays. Dustin was on the more severe side with both his seizures and delays.

I was 19 when I got pregnant with Dustin. His father was a boyfriend that I wasn't with for a very long time. I didn't know him very well. I knew I would be a single mom, and I thought: I can do this. And then, you get hit with this diagnosis like Dustin’s, everything changes. You find the strength you need to make it thought the challenges because there is just eternal love that you have for your child.

My pregnancy with Dustin was totally normal. I was extremely careful about everything I ate, and nothing showed up as unusual at any of my doctor appointments. When my due date rolled around, the doctor didn't feel enough kicks, so she had me go in for an ultrasound. They didn't see enough fetal movement. They induced me right there and then. When Dustin was born, he stopped breathing so he was put in to Neonatal Intensive Care Unit for eight days. After extensive testing, they couldn't figure out why he had stopped breathing, and so he was sent home. In hind sight, I think he might have had a seizure.

[By the time he was several months old] Dustin had between 20 and 100 smaller seizures every single day. [Because of them], he could hardly gain any milestones. The doctors used to say that if we could control the seizures, then he could ideally develop further. Unfortunately, no matter what medication we tried — and we tried many — nothing worked.

He couldn't walk. He couldn't talk. He was wheelchair bound. He did smile. He loved to kick; that was his favorite playtime activity. There was something about his personality that, even without words, brought joy to everyone. Dustin was hospitalized, on and off, in total for about half of his life. When he was at home, he had a nurse for 16 hours a day. He had a very regimented schedule of medication, and he was on a ketogenic diet which required being feed every three hours even over night. He also had physical, occupational, and vision therapy that was built into his schedule everyday.

Dustin was cortically impaired, so his vision would come and go. He could hardly make eye contact. He also had a trach [or, tracheotomy, a surgical opening created in the windpipe in order to allow access to the trachea]. He needed that because every time he would have a seizure he would stop breathing. One of Dustin's most endearing qualities was that he loved to hold on to his trach. He would pull off the device that provided humidification because he knew he could get someone's attention. He'd always get a kiss and someone to put it back on for him. In fact, he was buried with one in his hand.

When I had Dustin I was a college student who was eager to start a career as a graphic designer in New York City. I've always been a free spirit and had a drive to travel and experience as much as possible. When Dustin arrived it meant that I really had to focus and harness my energy to what my priorities were, my son and his needs. His needs always came first. And then school was second, but other than that there wasn't much else that I could put on my plate. I felt like I needed to finish school for him, because I need to be able to take care of him properly.

I went to school for graphic design, and a lot of [the best graphic design] jobs are in New York City, but, I felt like I would have been too far away from him. So I figured I would have to get a job at a small studio close to home. I knew I might not have as much room for growth or that I'd have to do a lot more freelance work. And that wasn't exactly what my dreams were, [because] I always really did want to be in the city, but I was certainly ready to give that up for him. Then after his passing, even though I was devastated, it was almost like he was allowing me to pursue that dream of mine.

[My] ambition, though, it's not as strong as before, since it isn’t for him anymore. You need a lot more self-motivation to do something for yourself than to do for your child who you love and care for.

The first time Dustin had a large seizure he was a month old. He just went stiff as a board and started turning blue. He was the color of a blueberry. I had no idea what was going on. I didn't even know it was a seizure. I called 911 right away. I was afraid this wasn’t an isolated thing, so [before we were discharged from the hospital] I made sure that we learned CPR.

Once we were home, it happened again. And I had to do CPR on him. The cops came and I just continued doing CPR in the front seat of a police car while we drove to the hospital. They had him in the hospital for a couple of weeks, and he didn’t have any seizures there, so they discharged him.

Six days later I had brought Dustin to a diner where I was with a couple of my friends, and Dustin went into one of his seizures. I remember knocking all of the silverware and plates off the table. I laid him down, and started CPR. I don’t know if it is just the love of the mother and adrenaline that kicks in, but you just have the focus to do what you have to do. It was like: This is my baby, and I will take care of it. I've got this. After that he got the tracheotomy, and then it never got to the point where he needed CPR again because we were always able to ventilate him very easily.

When Dustin was alive, I used the SCN8A family support group on Facebook. That was very helpful when Dustin was alive. But now that he's gone, social media is much harder to be on. I find myself like hardly ever going on it anymore because I see people going through such horrible things, and I can't do anything about it. And then it's also you know seeing other typical children, beautiful thriving children. Maybe it's a pang of jealousy in a way but it stings to see that. So I find myself not going on Facebook very often anymore.

Last September, Dustin had another seizure. This one lasted almost two hours. He was on life support in the hospital. But we had been in this situation so many times before that we thought: He's going to be fine. He always comes out of it. He always makes it through. He's a fighter. At first none of us were thinking that this was it. And then the doctor came in, and started talking to us about a DNR [a Do Not Resuscitate Order].

He had a fever that was 107.7 when he got into the hospital. And the doctor thought that the fever had done so much damage that he was in a multi-system organ failure. He wasn't peeing on his own. They had to give him diuretics, but because they were giving him diuretics, none of the medications that they were giving him to help everything else were staying in his system because the diuretics were just flushing [them] out. So there was like nothing that they were doing was helping. Nothing was working. And the doctor said he’d had a stroke.

I wondered what kind of life he could have if he even made it through. It's not like he had an amazing quality of life to begin with, so for it to deteriorate even further? I made the decision [to withdraw life support] along with his pediatrician. She came into the hospital that week every single morning. She sat with him and talked with me and cried with me. I think it was easier to make that decision with a doctor than to make it and discuss it with family.

So we had a day of people coming in and out of the hospital so they could pay their respects. That day Dustin started crashing. His heart rate would go down and up. They said that that's what happens before they're on their way out. It was clear he was dying, and I didn't want to prolong his suffering.

The day he died was a Saturday. I had my immediate family and his grandparents in the hospital room. We kept the lights low and played music. The doctors took him off of the machines, and they put him in my arms. We sat there for four hours. Then he slowly drifted off in my arms. It was the longest four hours of my life, [and then] the saddest moment of my life.

Sometimes I feel like some people didn't understand my decision, or like they thought I was copping out a little bit. I think that there are parents who wouldn't have made the same decision that I did.

Ultimately, each mother knows [her] own children best. I know that I've made the right decision. I just don't like that I feel like I have to explain it.

Dustin's name meant warrior. A month before Dustin passed away I got a tattoo of a dagger on my arm with SCN8A etched into it, for his gene. He fought a battle with SCN8A. I get to see it every day and know that I have my little warrior looking out for me.

If someone looks at me now, they don't even know I'm a mom, because they don't see my child. But I am a mom. Even though he’s not here I'll always be a mom. It's just something that’s inside me.

I had this whole life that is over. It is like I just lived a whole life. It's no longer my life anymore, but I want to still hold onto it.