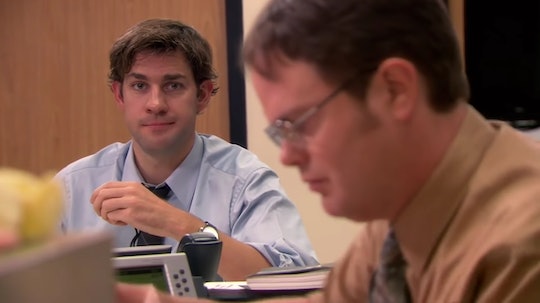 Finally, watching television for hours on end is about to pay off. Satellite TV provider Dish is offering to pay one lucky fan to watch 15 hours of The Office. That's right, you could get paid $1,000 to watch The Office. While the perks of the job sound pretty sweet, you can bet there'll be some significant competition throughout the hiring process.

"It seems like yesterday Michael Scott hit Meredith with his car, and Jim put Andy's phone in the ceiling," Dish said in announcing it latest job opening. "Believe it or not, The Office has been around for 15 years this March. To celebrate its anniversary, USDish.com is teaming up with one die-hard fan to watch 15 hours of The Office for $1,000." And while the role sounds almost too good to be true, Dish has promised, "isn't a case of Scott's tots."

Along with $1,000, the lucky Office worker... err, I mean, watcher, will also receive Netflix gift card and a bundle of The Office swag. So, just what does a paid gig watching The Office entail? According to Dish, the selected applicant will have nine days to watch 15 hours of The Office. That's roughly 45 episodes.

"The goal is to help us understand how often sitcoms repeat popular tropes," Dish said. "We'll provide you with general guidelines to track your experience, but in true Kelly Kapoor fashion, we also want you to share your unfiltered opinions and reactions on social media."

What's more, Dish has noted that there's no need to report to an office to watch The Office, meaning you can consider this a work-from-home gig.

To apply, fans must answer why they're the biggest fan of The Office in the world in 300 words or more and submit their completed application before the March 16 deadline. Dish has encouraged applicants to add a video submission to their application "to boost [their] chances." All applications should be submitted through the usdish.com website.