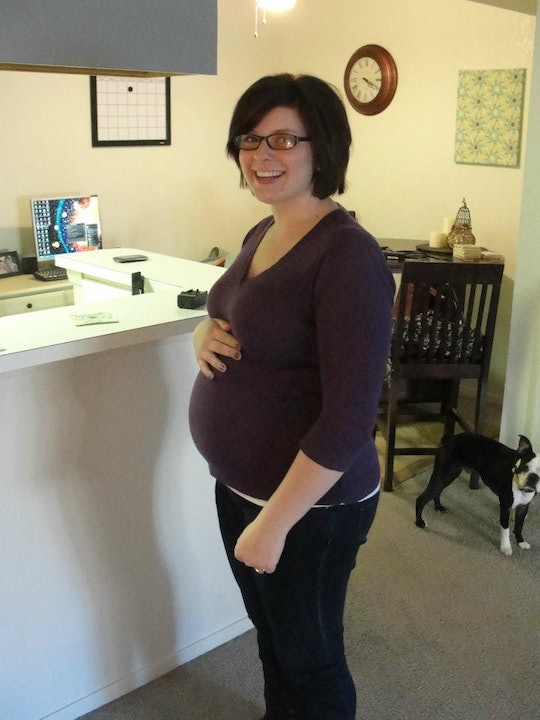 You Know What? I'm Glad I Requested A Non-Stress Test In My Second Trimester

Pregnancy is such a strange experience. Outside of your monthly appointments and the slow growth of your belly, you have no real assurances that there is a healthy child growing inside of you. Until we're told otherwise, pregnant moms are generally expected to trust that our bodies are doing their jobs, that our babies are in optimal health, that even though we can't see what is going on inside of us, things are going the way they should. During my first pregnancy, I had an exceptionally difficult time believing that everything was OK with my baby. I had bled a little early on and from that point on, I felt nervous. I was so worried about the health of my baby that I actually requested a non-stress test, or NST, late in my second trimester. According to the American Pregnancy Association (APA), a fetal non-stress test is performed after 28 weeks gestation and causes no stress to the baby. NSTs are often performed if you sense the baby isn't moving as often as usual, if you've gone past your due date, or if you (or your doctor) suspects that your placenta isn't functioning properly, according to the APA.

For the first half of my pregnancy, I didn't really have the proof I wanted that my baby was OK. There are no movements to track, so I just had to trust that my baby was growing and healthy. Hearing the heartbeat once a month eased my fears, but only for a few hours until the next worry popped into my mind. What if something was going wrong and I didn't know it? What if, at my next appointment, their heartbeat was no longer there? When my baby finally started kicking, I was thrilled to have one more sign I could hang onto that there was a healthy baby growing inside of me. But that confirmation wasn't enough.

In my first pregnancy, I was such a good patient, doing kick counts daily, sometimes more often than that. I would settle into bed for an hour or more, faithfully counting each time I felt the baby move or kick. My doctor had told me I wanted to feel a minimum of 10 kicks within two hours, so I paid such close attention because I needed that communication with my child in order to be able to relax and enjoy my pregnancy. At the time, I had a job that kept me active. I was on my feet for hours of the day and I actually really enjoyed staying busy. Being able to move around a lot, instead of sitting at a desk, kept me from getting to sore or stiff as a progressed into late pregnancy. I started to notice that it was harder to keep track of kicks when I was moving around so much at work — maybe because of all of my moving was lulling my daughter to sleep or maybe I was simply too busy to pay close attention.

I felt like I'd overreacted and that if I'd only slowed down for a little while longer, I would've known everything was OK without a visit to the hospital. But the more I thought about it, the more I realized I'd rather feel embarrassed than anxious or afraid that something was wrong with my child or my pregnancy.

Then, one day, when I sat down for lunch, I felt anxious when I realized I hadn’t notice my baby kicking at all that day. I sat quietly for awhile, trying to count kicks, but when I didn’t feel any movement, I panicked. I called my doctors and shared my concerns. They assured me that everything was probably OK, but they understood why I wanted to come in for non-stress test.

I left work and drove straight there. They checked me in quickly, attached me to fetal monitors, and left me alone with a few magazines. Within a few minutes of the start of the test, my baby started to move and I felt a wave of relief. I sat through the rest of the test, my baby moved more than enough to confirm that everything was OK and they told me I was good to go home.

On the drive home, I admit I felt really embarrassed. I wondered if my doctor was annoyed with me or if the nurses at the clinic were rolling their eyes or calling me a typical first-time mom. I felt like I'd overreacted and that if I'd only slowed down for a little while longer, I would've known everything was OK without a visit to the hospital. But the more I thought about it, the more I realized I'd rather feel embarrassed than anxious or afraid that something was wrong with my child or my pregnancy. I'd rather know than have to wonder. Sure, my non-stress test ended up showing everything was fine, but isn’t that why parents-to-be have those tests in the first place? Because they hope — and want to know — that everything is OK? I realized I could've gone on with my day, distracted and obsessing over my baby’s wellbeing, or I could take advantage of the healthcare I was fortunate enough to have available to me and make sure everything was still alright. And you know what? I'm glad I did.

As a three-time parent, I've learned that it isn’t worth feeling anxious during my pregnancies or in any aspect of child-rearing just because I want to save face. Whether I request a medical test for my peace of mind or want to take my newborn into the pediatrician because I’m nervous about a new symptom, I'll always chose to be safe rather than sorry. That's my right, and I intend to use it whenever needed.

More Like This
OB-GYNs Explain The Connection Between Stress & Miscarriage
Why Is My Discharge Brown? Experts Explain
Why Is My Vagina Itchy? Experts Explain
Doctors Swallowed LEGOS To Prove Everything Is Awesome For Kids Who Do The Same
What Parents Are Talking About — Delivered Straight To Your Inbox