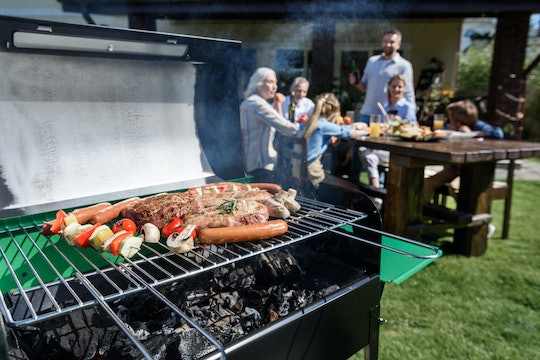 You May Want To Say Goodbye To BBQ If You're Trying To Conceive, Study Says

It may not come as a surprise that blackened barbecue foods aren't exactly healthy for you. But if you're looking to get pregnant, you may especially want to kiss the grilled goodness goodbye for a while. That's because blackened barbecue could be contributing to infertility in women, according to a new study.

Researchers from Melbourne’s Hudson Institute of Medical Research studied the uterus cavity of 17 thinner women, and 16 women diagnosed with obesity who were struggling to conceive, according to The Sydney Morning Herald. They found that the group with obesity had “very significantly elevated levels of a sugar by-product called advanced glycation end products (AGEs)."

According to SMH, the AGEs can either form naturally in the body, or via a diet that consists of "sugary, processed, or blackened foods." And how does that affect fertility? It can cause inflammation in the cells lining the womb, which makes it more difficult for an embryo to implant.

"We also found that AGEs interfere with placental development, which may contribute to pregnancy complications," Dr. Jemma Evans, who led the study, said, The Sydney Morning Herald reported.

It's not the first of its kind to warn that pregnancy and BBQ foods don't do well together.

"Certain foods can harbor bacteria that are particularly dangerous during pregnancy," Mary Lynn, an assistant professor of obstetrics and gynecology at Loyola University Medical Center told Fit Pregnancy. She was referring to foods like hot dogs, hamburgers and cheeseburgers, deli meats, barbecue chicken, potato and pasta salads, and so many more mouthwatering meals.

Processed meats and salads that have been left out for too long, for example, can harbor listeria, a type of bacteria that can cause a rare but nonetheless dangerous infection associated with miscarriages, stillborn births and birth defects, Lynn told Fit Pregnancy. And like BBQ foods can affect one's pregnancy, pregnancy can affect how one handles their BBQ foods, too. Because pregnancy weakens the immune system, women are more susceptible to food poisoning and illnesses from undercooked burger patties and chicken, as reported by the FDA.

We also know that, on average, babies of barbecue-eating moms weigh less than babies of moms who forgo the juicy burgers for a few months. A study published in the journal Nutrition that studied babies of moms who ate BBQ during pregnancy found that they weighed almost half a pound less than those whose mothers didn't. Therefore, the researchers concluded that prenatal exposure to grilled meat might be hazardous for fetal development, as reported by the National Center for Biotechnology Information.

The Melbourne study's co-author Professor Lois Salamonsen reportedly said that women hoping to have children should simply avoid sugars and highly-processed and highly blacked foods, according to The Sydney Morning Herald. There are also medications that can bring down AGE levels in those who have neither the time nor the capacity to implement lifestyle changes.

About 10 percent of women (6.1 million) in the United States ages 15 to 44 have difficulty getting pregnant or staying pregnant, according to the Centers for Disease Control and Prevention (CDC). So understanding how changing their diets could help them in their pregnancy journeys is vital, even if that means giving up kebabs.

Of course, it won't be easy for the women who do get pregnant and find that they suddenly have some serious BBQ cravings — maybe even intensified since they've given it up for so long.