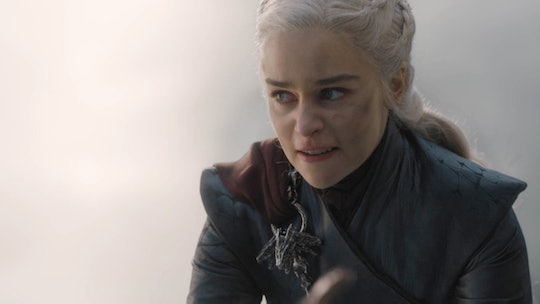 So. You Named Your Baby Khaleesi... Now What?

WARNING: SO MANY SPOILERS AHEAD FOR SEASON 8 EPISODE 5, "THE BELLS." SO MANY. A few years ago, you were hugely pregnant, relaxing on a Sunday night, eating some pizza and watching Game of Thrones. You saw a woman, a woman who'd been broken, beaten, cast aside, and you watched that same woman become a ruler. It was inspiring, and you thought to yourself, "I'm going to name this baby Khaleesi." So you did. Then you watched last night's episode, and the inspiring woman disappeared as she burned a city of innocents. Now you're thinking, you named your baby Khaleesi, and clearly, things have taken a turn. Now what?

What was once a beloved character, known for her fairness and love of freedom and justice, is now the Mad Queen, riding her dragon across the Red Keep, blasting his fire out at soldiers, women, children, and the elderly. She was heading to a dark place even before watching her BFF get beheaded, falling off the tower of the keep, and making a few audible "thuds" as she hit the sand. You could see the beginnings of her madness-laced hubris in her response to the Tarlys, how she handled the whole thing in Meereen — not that we blamed her on that point — and served up the khals extra crispy. Again, pretty justified. It's just these last few episodes, especially last night, might make you rethink your decision to name your kid Khaleesi.

Even with all the potential foreshadowing, it was a pretty big shock to the system to see someone whom we all assumed had been so clearly mapped out to be the protagonist, the balance between good and evil on the show, become a serial killer riding a scaly flame thrower. It was pretty clear early on in the episode, as she cooly executed Varys without so much as blinking, that we were dealing with a very different Khaleesi. Gone was the justice-loving woman with a little too tight of a relationship with her nephew, and in her place was pure Targaryen madness.

And according to census data, at least 2107 of you have named your child "Khaleesi." What does this mean for your kids? Well, if you can divorce the name from the character, or even just pretend like Season 8 didn't really happen, everything is all good. And honestly, that's probably the best idea. Just keep your kids away from eggs of unknown origins, and allow yourself to understand that you named your girl with the best intentions, and it just so happens to sound cool, so that was a bonus. It's a unique name, so it's going to be harder to pretend it's unrelated to the series, as you would if say, you named your child "Patrick," and he develops a love of business cards.

Alternatively, you could do what I would do, and that's rail against the writers and producers of the show. Did they really need to do that to the Unburnt? To the Queen of the Andals and First Men? To the Breaker of Chains? Sure, producers and writers David Benioff and Dan Weiss told the Hollywood Reporter that it was always building to this, but with the exception of Meereen, an entire civilization of slave owners and slaves, Khaleesi of The Great Grass Sea has usually dealt out death as revenge or punishment in small doses. Yes, murder is still murder, and burning people alive on a funeral pyre or starving them to death in a vault is arguably pretty bad, but it wasn't laying-waste-to-civilians-who-surrendered bad. Call this part of the season a bad judgement call. It wasn't you who made it — it was Benioff and Weiss. Your Khaleesi was only sort of homicidal, and it was mostly justified.

Or you could just start calling your daughter "Leese," and then only people at the Social Security office and the school principal know the whole truth. It's an option.