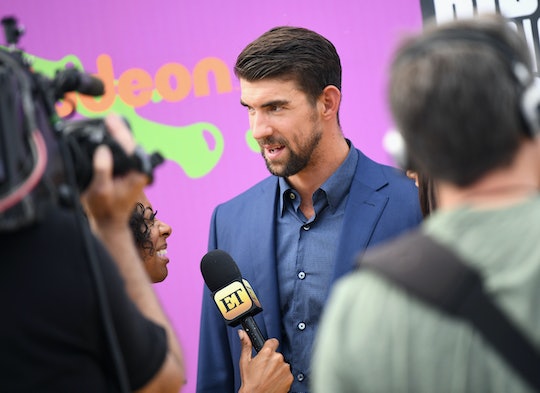 Michael Phelps' Sweet Comments About Fatherhood Are Too Pure

Michael Phelps might be best known as the most decorated Olympian swimmer of all time, but at the moment, he's simply enjoying his time as a dad. Speaking to People at the Nickelodeon Kids’ Choice Sports Awards on Thursday, the retired Olympian said being a dad was the "coolest" thing, and imparted a few life lessons he's learned about life with a little one. In fact, Michael Phelps' sweet comments about becoming a parent will make you want to slow down and cherish the time you spend with your toddler, even when all they're doing is banging a cupboard door open and shut.

"It’s so funny, but I had somebody tell me, ‘Never wish that they walk, talk, do this or that, because by the time they do, you miss them,’" Phelps told People on Thursday. He continued:

And it is hard because now he is walking, he is cruising around the house, and it’s awesome just watching his emotions. [Even] watching him get frustrated at times when he can’t really tell us what he wants. I think that is the coolest thing, watching him grow, and watching him figure out new things.

Phelps and his wife, model Nicole Johnson, welcomed baby Boomer Robert in May 2016. Boomer now has his own adorable Instagram account, where over 790 thousand followers keep up with his pint-sized adventures.

Phelps said that watching Boomer figure out simple tasks was a great experience as a parent — and to be fair, I think we can all agree that watching young kids' minds whir is always entertaining. "We came into the house where we are staying out here, and we don’t have steps in Arizona, so the only thing that he [wanted] to do was crawl up and down the steps," Phelps told People. He continued:

That is all we did, we just stood by the steps and he went up-down, up-down. It is the little things in life, where watching him are the coolest.

The 32-year-old dad has previously expressed similar sentiments to other outlets, telling Entertainment Tonight on Wednesday, "For me, watching Boomer every day and watching him grow up literally in front of my eyes… it's really awesome."

Clearly, Phelps knows how to appreciate the little moments with "Booms," as he frequently calls his son, and it's a good reminder to parents everywhere that they'll only get to see their kids go through each stage once — so there's no real need to rush on to the next step. It's not possible to do all the time, of course, but when parents can, it's worth it to sit back and savor the moment for a while.