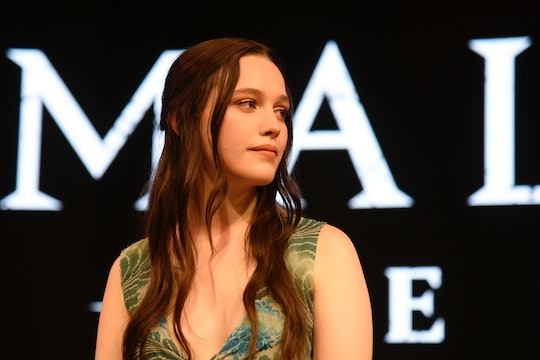 'You' Welcomes A New Leading Lady In Season 2

It may be difficult to imagine how Netflix's You could continue after Joe dispatched of half the supporting cast, including leading lady Beck, but the show will go on. And You Season 2's new star Victoria Pedretti is an alumnus of the streaming service. When she stars opposite Penn Badgley in the upcoming season as Love Quinn, Netflix subscribers might find her very familiar.

If you think you've seen Pedretti in something before, then you likely recognize her from another Netflix hit: The Haunting of Hill House, where she played the often-spectral Nell Crain. It was her first major role because she's a recent graduate of Carnegie Mellon. Her other credits include two short films, Sole and Uncovering Eden. But she has several projects in the works. In addition to playing Love Quinn, Pedretti will appear as Lulu in the upcoming Quentin Tarantino film Once Upon a Time in Hollywood. She's also going to be in the Annapurna film Shirley, which co-stars Elisabeth Moss. Though Pedretti's acting career is just getting started, it seems like she's going to be very busy for the next few years.

So far, a premiere date hasn't been announced for Season 2 of You, but Pedretti's casting can offer a few clues about what's going to happen when the show returns.

When Season 2 begins, Joe will have relocated to Los Angeles, leaving New York and all its ghosts behind. Once there, he'll meet Love. According to Variety, Love is an aspiring chef who works as a produce manager at a fancy grocery store. Unlike Beck, she has no interest in social media or self-promotion, which should make it a lot more difficult for Joe to keep track of her every move. He'll have to take his stalking analog. Or maybe not stalk women at all! That would be a good idea.

Variety revealed that Love was dealing with deep grief, which gives her something to bond with Joe over. It's unlikely that her grief springs from her own horrifying misdeeds like his does, but who knows! Perhaps Joe will find someone even worse than he is in Season 2. However, from what showrunner Sera Gamble has had to say about the new character, Love sounds kind of lovely.

While talking to Entertainment Weekly, Gamble described Love as "very warm" and "carefree." She's different from the ambitious Beck, which results in a very different kind of relationship for Joe. He's a New Yorker who firmly believes every terrible thing he's ever heard about the West Coast, but things may change with Love's influence on his life.

"To me, Love embodies the best of Los Angeles," Gamble said. She explained that Season 2 would illuminate a different side of L.A. that a native like Love understands well. "She has really absorbed the best of the city and she's really artistic with the way that she lives her life."

Everything is going to be different when You begins its second season, and Pedretti's role as Love is the clearest indicator that things are changing.