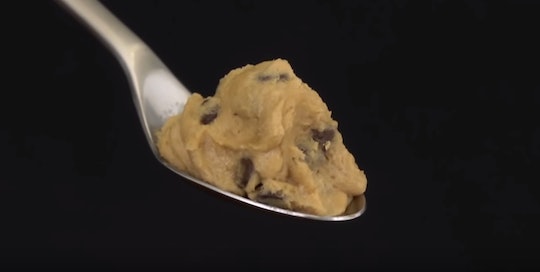 You Shouldn't Eat Raw Cookie Dough This Holiday Season, According To The CDC

Ah, it's that time of year again — a time for baking delicious foods and desserts, gathering with family and friends, opening presents, and then gorging on a satisfying calorie-bomb of a meal. As parents set out to bake holiday treats with their kiddos, however, they should make sure to first lay a few ground rules. Like, wash your hands before and after handling ingredients. No licking your fingers while you're decorating cookies. And definitely no taste-testing the cookie dough. In fact you shouldn't eat raw cookie dough this holiday season at all, according to the CDC.

With festive parties just around the corner, the Centers for Disease Control and Prevention (CDC) is once again reminding the public to take caution if they're going to be handling raw cookie dough — and as enticing as it may be, never to eat it. “When you prepare homemade cookie dough, cake mixes, or even bread, you may be tempted to taste a bite before it is fully cooked,” the "Say No to Raw Dough" page on the CDC website reads. “But steer clear of this temptation — eating or tasting unbaked products that are intended to be cooked, such as dough or batter, can make you sick."

Unfortunately, it's not just raw cookie dough you're ultimately planning to bake and then eat that's an issue. The CDC also warns that using dough for art projects is risky as well, as People pointed out. “Children can get sick from handling or eating raw dough used for crafts or play clay, too,” the website reads.

But what makes eating and improperly handling raw cookie dough so dangerous in the first place? It's two reasons, actually. That's because the eggs could carry salmonella and the flour could have bacteria that can make people sick. The kicker: In order to kill off these potential risks, you have to cook it. And don't think you're immune just because you've been doing it for decades. A large, multi-state outbreak connected to raw flour sickened people in 24 different states in 2016, according to the Michigan State University Extension. It could happen to anyone.

Still, it seems the CDC is going to have to pry raw cookie dough out of the cold, dead fingers (but hopefully not) of plenty of Twitter users. Because nothing is coming between them and their dough. One person wrote, "Growing up, my mom used to have to make a quadruple batch of cookies dough. I'd eat half as cookie dough (1 batch eaten almost as soon as it was out of the oven), and I managed to make it well into adulthood, even after umpteen years, and 2 tons, of raw dough. Good times!"

Another Twitter user wrote, "Sorry but I just started a raw food diet and raw chocolate chip cookie dough is on the top of my list."

Yet another person declared, "YOU’RE NOT THE BOSS OF ME."

I, too, am among the I-ate-a-ton-of-cookie-dough-during-my-childhood-and-lived-to-tell-the-tale camp. But you know what? That doesn't mean I'm going to continue putting my health — or my kids' — in jeopardy. Because now I know better. However, if you still want to get your cookie dough fix without the risk of food poisoning, rest assured there are still other options. Like cookie dough ice cream, for example. Or cookie dough bites candy. Heck, they even make pints of safe-to-eat cookie dough for you to eat with a spoon, if you so desire.

So seriously. Back away from that bowl of raw sugar cookie dough and refrain from licking the spoon of well, anything with uncooked eggs/raw flour in it this holiday season. Because spending Christmas with rampant vomiting and diarrhea — and potentially even being hospitalized — simply isn't worth it.