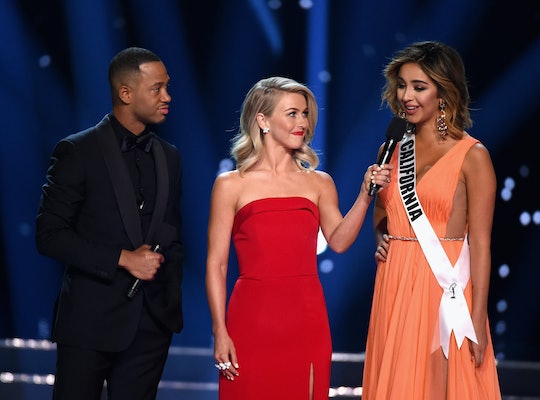 During the Miss USA 2016 pageant held in Las Vegas this weekend, Miss California — 20-year-old Nadia Mejia — was widely ridiculed by social media haters for botching the answer to an extraordinarily difficult question. The question itself was a complicated open-ended economics query that Mejia was expected to answer in less than 30 seconds. The truth is that you shouldn't make fun of Miss California's interview answer, not least because the answer to this question has eluded some of the brightest minds of our time.

The bungled moment came during the interview portion of the pageant, when each contestant is asked a question for which they aren't given the chance to prepare —in other words, they don't know the question in advance. Reality television personality Nigel Barker asked Mejia how to narrow the gap between the rich and the poor in the United States. Appearing to immediately grasp that she was in quite the pickle, Mejia closed her eyes and paused for a long while before answering.

"When it comes to social and economic equality, I think that the rich and the poor need to stop being so segregated," Mejia said. "I think there is a middle class, I think that the rich need to…" at this point, Mejia paused. The crowd was kind enough to cheer her on in the interim, clearly relating to the fact that they wouldn't have known the answer, either.

"I think that the rich need to be able to be giving, and I think the poor need to work hard, and I think the middle class need to come together and find and in-between, thank you,” Mejia said, finishing with a hurried, embarrassed flourish.

Over on Twitter, social media users were quick to swoop in on the easy target, with users saying that she sounded like "Miss Teen South Carolina" with her answer, and that her answer represents "what's wrong with America."

It seems like answering complex economy questions is a bit much to expect during a Miss USA pageant, and Mejia herself, who is the daughter of '90s rapper Rico Suave, was the first to point this out. After the pageant ended, Mejia took a funny video of herself and former Backstreet Boy Howie Dorough singing about the embarrassing moment to the tune of I Want it That Way.

"Why can't the USA see... I don't know about the economy," Mejia belted in the video, which she posted to her Instagram account.

As for how to solve that income inequality gap in the United States, recent surveys show that there's a fundamental contradiction in the way most Americans perceive the problem. According to a 2015 Los Angeles Times article, numerous polls show that more and more Americans perceive a widening economic gap in the country—yet at the same time, continue to believe in social mobility.

"The idea that there are haves and have-nots suggests that mobility doesn't exist," Michael Dimock, associate director at the Pew Research Center, told The Los Angeles Times. According to Dimock, Americans continue to hold the view that economic mobility is a cornerstone of the American experience, even in the face of a reality that negates it.

These contradictory viewpoints show a fundamental unease with the topic of economic inequality amongst Americans. On the one hand, it's the biggest problem of the contemporary United States. On the other hand, accepting its existence means that the American dream is an illusion. This discomfort with defining the nature of the problem might partially explain why politicians, who seek to appease the general public, often hold flip-flopping views about income inequality—with the exception, of course, of Vermont Sen. Bernie Sanders, who has pretty much staked his campaign on the idea that income inequality is an unambiguous evil.

Frankly, Mejia's thoughts about income inequality were a tad more sophisticated than presumed Republican presidential nominee Donald Trump, who recently performed a complete 180 on the topic of the minimum wage. Back in November, Trump stated in a debate that he "can't be" sympathetic to those who seek to raise the minimum wage, and that "we have to leave it the way it is."

But then, just last month, Trump said in a Meet the Press interview that "I don't know how people make it on $7.25 an hour. That being said, I would like to see an increase of some magnitude, but I would like to leave it to the States."

With confusing cues like that from our country's top politicians, it's easy to see how Mejia is a bit uncertain about income inequality.