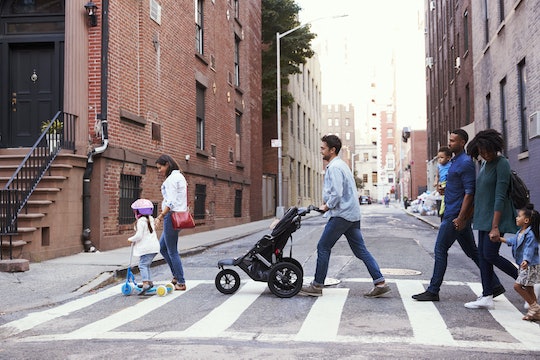 Study: Babies In Strollers Are Exposed To More Than Twice The Air Pollution

It's a classic image of parenting: strolling down the sidewalk pushing a sweet baby in a stroller, waving to those who pass by. But such excursions come with an unseen and unexpected risk. Due to their position closer to the ground, babies riding in strollers are exposed to more pollution than you might expect, according to a recent study.

Researchers from the Global Centre for Clean Air Research at the University of Surrey looked at how much air pollution people are breathing in and found that babies in strollers are exposed as much as 60 percent more pollution than their parents, according to Science Daily. These pollutants are particularly dangerous to infants, as they can potentially cause brain damage and hinder future development.

Children in strollers are positioned lower to the ground than their parents, and the air tends to be most polluted down there. Most strollers are around two feet above ground level, according to the Huffington Post, which places the children in them close to vehicle exhaust pipes and the pollution that they spew. As the BBC reported, researchers found that these children are breathing in "toxic metals" that impact the brain's frontal lobe and effect their cognitive abilities and brain development.

Professor Prashant Kumar, Founding Director of the Global Centre for Clean Air Research said in a statement to Science Daily that infants are uniquely vulnerable to air pollution:

We know that infants breathe in higher amounts of airborne particles relative to their lung size and body weight compared to adults. What we have proven here is that the height most children travel at while in a pram increases the likelihood of negative impacts from air pollution when compared to an adult.

Kumar went on to explain that "because of their tissues, immune systems, and brain development at this early stage of their life, it is extremely worrying that they are being exposed to these dangerous levels of pollution.”

Children across the globe are exposed to toxic air, almost 17 million of them, according to a report published by UNICEF. When children are exposed to this kind of pollution their risk of experiencing lung problems — such as asthma, wheezing, coughs, lung cancer later in life, and infections such as pneumonia — are greatly increased according to the British Lung Foundation.

In order to mitigate this risk, Kumar and the team of researchers suggested a number of strategies such as controlling vehicle emissions and putting up barriers like hedges between sidewalks and the road. Additionally, they recommended community activism efforts to raise awareness among parents of the risks associated with strollers and air pollution, according to HuffPost.

Another potential step that parents can take is to choose to wear their babies, rather than push them in strollers, while walking along busy highways. Along with keeping babies above the elevation associated with exhaust fumes, baby wearing comes with a slew of benefits. Bel Moore, mom, midwife, IBCLC, Child and Family Health Nurse, and baby wearing consultant told Healthy Mummy that baby wearing can aid families in reaching breastfeeding goals, promote baby's physical development, and facilitate bonding between baby and the wearer.

All of these suggestions only target a small part of the problem, though. Along with recommendations for families to protect their little ones, Kumar and her team call on the public to make changes that improve air quality for everyone, such as carpooling or taking public transportation. Considering that the World Health Organization cites air pollution as a leading cause of lung cancer, stroke, heart disease, and lung disease, it is certainly an issue that everyone would benefit from improving.