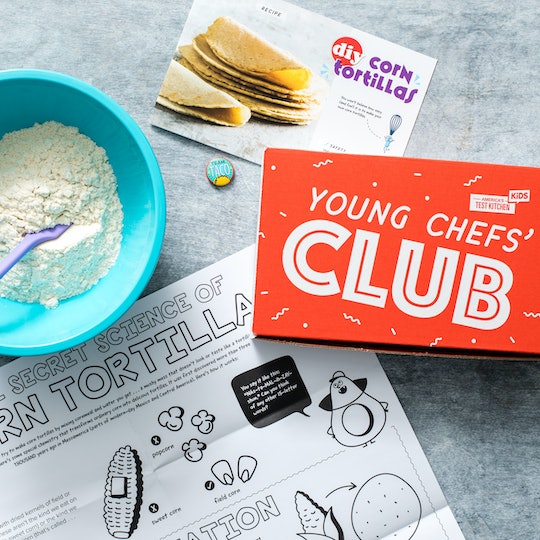 Although my sister and I lived pretty much identical childhoods, she knows how to cook and I don't. I blame the fact that my mom enrolled her in cooking camps and not me, as it helped get little sis interested in making food from a young age. If you don't want your kiddo to end up like me but also don't have time to trek them to camp twice a week, you can try an America's Test Kitchen Young Chef's Club subscription box instead, a new kid-tested and kid-approved way to get little ones excited about cooking.

You're probably familiar with America's Test Kitchen as a company in some capacity, whether it be through their television shows, cookbooks, or website full of recipes. The best thing about ATK is that their content is specifically made to help home cooks, so you'll find recipes even the most inexperienced beginner (aka me) could make with ease. And now they're expanding into content for kids with subscription boxes.

The Young Chef's Club kits work like any other subscription box. Once a month, your little one will get a box full of family-friendly recipes that have been tested by other kids like them. The cooking projects range from quick 15-minute tasks to longer projects, and the ingredient lists will be sent to parents in advance of delivery so you can have everything they need to start cooking in the house when it arrives. "We created the Young Chefs’ Club to empower kids to lead in the kitchen, engaging their curiosity and enthusiasm as cooks, eaters, and experimenters," editor-in-chief Molly Birnbaum of America’s Test Kitchen Kids explained in a company press release.

Every box will come with reusable recipe cards (shown above) and a special cooking tool that can help them with that month's recipes. To make it even more fun, the boxes have a different theme every month, so kids get to explore different kinds of cooking. The first month (October) is "Taco Truck" month, with "Say Cheese," "DIY Cake Decorating," and "Snap, Crackle, Crunch: All About Texture" to follow. During Taco Truck month, kids can learn how to make corn tortillas, chicken tinga tacos, veggie tacos, pickled red onions, and cabbage slaw.

Plus, you get more than just recipes with a subscription. The boxes will also include other fun activities and scientific experiments, boosting kids' creativity and understanding of cooking. For instance, Taco Truck boxes include the "awesome avocados and amazing acids" experiment, a build-your-own-taco truck activity, and more. And the subscription gets buyers access to Young Chef's Club's online library of recipes too, giving them even more to try.

The boxes are recommended for kids 5 and up, and how much parent involvement is needed depends on how old your little chef is. A subscription costs $20 a month, though that doesn't include the price of ingredients, which you'll have to buy separately. But it's kind of nice that the ingredients don't all come at once, as it allows you to space out the cooking time over the course of the month.

Head to the company site to sign up for a subscription today, and a box will be waiting on your doorstep by next month. Your little one is already a brilliant cook in the making; Young Chef's Club just gives them the tools they need to master their craft.

More Like This
16 After-School Snacks For Hangry Kids
Tips For Apple Picking With Kids
These Oktoberfest Instagram Captions Will Get Likes & Prosts
Eden Grinshpan On Getting Your Kids To Love Fish Eyeballs (Yes, Really!)