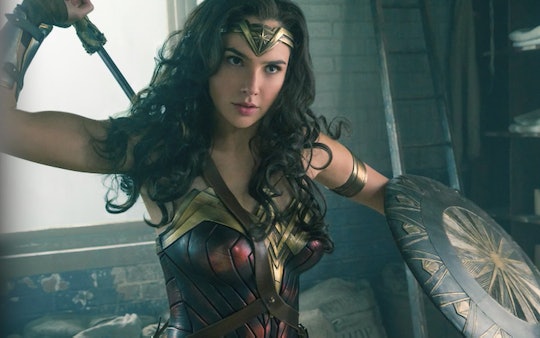 Young Girls Are Dressing Up As Wonder Woman

The new Wonder Woman movie hits theaters nationwide on Friday, June 2, and it's already both highly anticipated by fans and critically acclaimed. And in the weeks leading up to the release of the film, photos of young girls dressing up as Wonder Woman for the new movie have been hitting social media. The fact that so many young girls are so excited to see this movie featuring a leading female character front-and-center is extremely important, and the photos of them dressing up like the character are both kind of a big deal and incredibly cute at the same time.

In fact, the director of Wonder Woman, Patty Jenkins, specifically fought for the movie not to have an R-rating so that little girls could easily go and see it, according to Cinema Blend. She told writer Eric Eisenberg:

I cared a lot about it never being an R-rating. And I totally support the movies that do have an R-rating, but in this case I was very aware that little girls were going to want to see the film, and I was very protective of that. So it had to not be Rated R to me. I would have been happy to go for PG, but it's World War I, so we couldn't!

Now, photos of young fans standing in front of posters for the DC Comics movie dressed up as Wonder Woman, and other images of young girls dressed as the iconic female superhero are making the rounds in the final days before the film opens in theaters. Some may be attending advance screenings, or other events advertising for the upcoming film.

The fact that so many little girls are compelled to dress up as Diana Prince in her first "solo" film is heartwarming. Young women need role models like Wonder Woman to look up to — and if the internet is to be believed, this new version of the classic comic story is already inspiring many young girls to don their own Lassos of Truth and head to the theater.

One photo in particular has gone viral. Juan Lapaix reportedly took a photo of his daughter, dressed as Wonder Woman and looking up at Diana's face on a large poster advertising the movie. He said on Twitter:

We pride ourselves on teaching our daughter that being a princess is not a symbol of weakness; but that you can be a strong princess, willing and able! At the PR Comiccon this year we dressed her as wonder woman. We took the pic and went viral.

It's been retweeted by Jenkins, as well as Geoff Johns, the president and Chief Creative Officer at DC Comics. Clearly, the moment struck others as being significant.

But there are other similar photos floating around Twitter as well. Twitter user @wonderdianas posted several photos of young girls dressed up as the character, and captioned the post:

"why is wonder woman even so important???"

And then she let the photos speak for themselves.

And outside of the theater, journalist Yvonne Redmond tweeted, "There is an itty bitty little toddler running around Grand Canal street in a Wonder Woman costume.. *melts* <3"

Twitter user @kfam went old school when she posted a photo of herself dressed as Wonder Woman as a child, and said, "Me in my homemade #WonderWoman Halloween costume in 1978ish. I even had the #LassoOfTruth and wrist guards."

And @StewieMcQ made comparisons to the 2015 Star Wars: The Force Awakens character, Rey, when he tweeted, "Wonder Woman is this year's Rey, giving little girl heroes someone to look up to."

There were slightly more specific versions of the character and costume:

And some of the girls were joined by fellow superheroes:

Speaking of, Gal Gadot's own daughter, Alma, apparently once decided she wanted to dress as a different female superhero, and Gadot recently shared the photo on The Ellen Show. Nothing wrong with representing for some other super women, right?

On social media, everyone sharing these Wonder Woman costume photos seemed to understand how influential this film will probably be for young girls everywhere.

Comic books and the movies that follow sometimes seem like a bit of a "boys only" space. For example, when the Ghostbusters remake was made with an all-female cast, it faced a sexist backlash. But many women are just as interested in these stories, and Wonder Woman gives women and little girls alike their own kickass superhero to be inspired by. As Brian Webster over at MoviePilot.com said of the photos of girls dressed as Wonder Woman, "The excitement on their faces tells us everything."

Hopefully, a whole new generation of young girls will now understand that they, too, can be just as tough, just as powerful, and just as inspiring as Wonder Woman — even without superpowers.