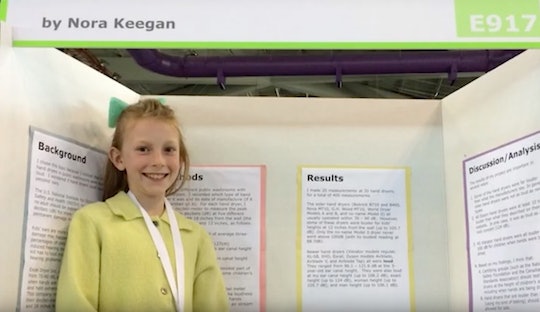 When it comes to being ambitious, it's important to remember that there are no dreams that are unachievable — even if you're a kid. On that front, this story about a young girl's curious and determined nature is as inspirational as they come. Recently, a 13-year-old girl conducted a study on hand dryers and whether they hurt kids' ears, and the research was so thorough that it ended up being published in a legitimate scientific journal.

Nora Keegan, from Calgary, Alberta, was 9 years old when she discovered that her ears would ring after she dried her hands with an electric hand dryer in public restrooms, The New York Times reported earlier this month. Anyone who is familiar with the devices will know that they do make a distinct noise, and one that's pretty loud. Curious about how this could be impacting her own health, Nora began to investigate.

In a recent interview with Good Morning America, Nora revealed that she and her family utilized a ruler and measuring tape to determine the dryer's volume, and then a professional decibel meter to determine the amount of sound that the dryer was creating. Nora explained to Good Morning America that she and her family would actually carry the supplies around with them wherever they went, and measure as many hand dryers as they could find. Overall, Nora estimated that she evaluated 44 hand dryers in total, according to WRAL, before comparing it to information on how many decibels are safe for a child's ears.

"I found that hand dryers can actually be over 100 decibels, which children shouldn’t be exposed to at all," Nora told Good Morning America. "I thought, 'This is crazy because hand dryers are such a daily, common thing, to be hurting children’s ears.'"

Nora's research earned her a bronze medal in a 2016 science fair, and then a gold medal the next year, according to NPR, however, the big win was being published in the Oxford Academic's Paediatrics & Health journal in June of this year.

Nora's research ultimately determined that, given the U.S. Centers for Disease Control and Prevention (CDC) had previously stated exposure to noises greater than 111 decibels was not safe for hearing, and that the hand dryers were creating up to 100 decibels of noise, they are potentially dangerous for children's long-term hearing, as the World Health Organization (WHO) has previously stated that children's ears are even more sensitive than adult's.

The CDC has also stated that exposure to noise about 120 decibels can cause "immediate harm" to the ears," and though the hand dryers do not cap out at that volume, they do loom dangerously close. Additionally, as Nora pointed out in her study, the noise Environmental Protection Agency (EPA) states that "noise greater than 85 [decibels] is dangerous to children’s hearing, and all children require hearing protection at that level."

However, Nora's research also offers suggestions for possible solutions, particularly noting that not all dryers emitted the same volume, and therefore, should be taken into consideration when choosing a product.

"This study reveals that not all hand dryers are equal in their hearing safety. These results can be used to guide regulators, builders, and landlords in making decisions about which dryers to install in public facilities," the conclusion read. "... This study shows the importance of measuring dryer loudness at the location of children’s ears as multiple dryers were much louder at children’s heights than at adult heights.

In the end, it was the determination of a young girl that led to legitimate research being published, and a potential health hazard being identified for the wellness of kids everywhere. On all accounts, this is a triumph and the story serves as a true inspiration for all kids and adults.