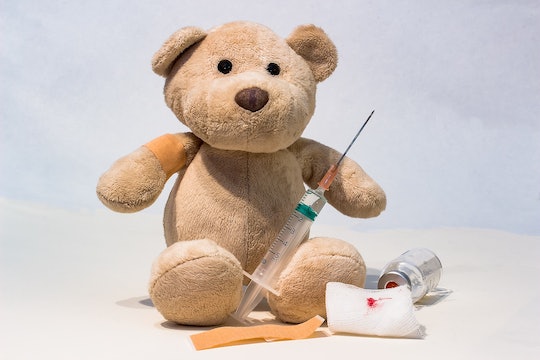 The most hotly debated topic for parents is whether they should vaccinate their children. While the attacks on both sides of the debate can get pretty ugly, one aspect not often mentioned is that this wasn't something parents were really worried about 20 years ago. A study published by Pew Research confirms that there is a generational gap in the attitudes about vaccines, because it shows that young parents worry more about the MMR vaccine's side effects.

First of all, most of us have not come into contact with measles, mumps, or rubella, which is thanks to vaccinations. So millennials are less afraid of what can happen if they don't get vaccinated, simply because they don't know first hand how bad the consequences can be.

"One of the great frustrations for all of us is how hard a sell prevention is...," pediatrician Dr. Louis Z. Cooper said in an interview with PBS:

One of the challenges in the United States with immunization is that we're victims of our own success. ...Not only don't today's [parents] know about measles, polio, and diphtheria and meningitis; half the doctors who are now practicing in the United States are young enough so that they don't have much experience with these conditions either.

Young parents are millennials, a generation who trusts social media and blogs more than traditional forms of authority such as federal government vaccination guidelines. But it's not just because millennials want to rebel against authority that some may choose not to vaccinate their kids: the first study showing a link between vaccines and autism was first published when we were young, and some millennials grew up believing it.

Those studies have long been disproven — and the creator of the study stripped of his medical affiliation — but the damage was done: almost 10 percent of Americans believe vaccines are not safe, and one in five millennials believe vaccines cause autism.

Those fighting against vaccinations have a loud presence on social media and mommy blogs:

“It’s difficult to match up boring science against a story of a parent who ‘watched their child change overnight because of the vaccine that they got,'” the Immunization Action Coalition's Diane Peterson told health publication STAT News.

But those who do know more about "boring science" are less likely to share concerns about the side effects of vaccines, Pew Research data indicates. Almost 80 percent of those with a high level of general science knowledge believed the risks of the MMR vaccine are low, while just 50 percent of parents with a low level of science knowledge feel that the vaccine is safe.

The good news? More millennials are in STEM fields than previous generations, which means that more millennials have a high level of science knowledge.

Vaccination advocate groups such as Every Child By Two are raising support to track immunization rates and give free vaccines to low-income children, while health organizations are working to allay parents' fears about vaccines so they can understand that the more vaccinated the population of America's children is, the healthier they'll be.