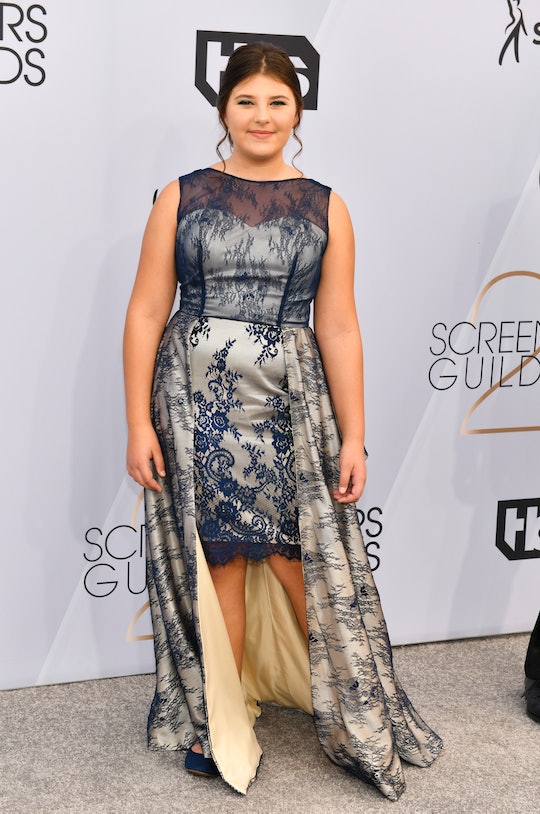 Hollywood might think of this as awards season, but moms and girls know better: The real event in January is the kickoff to Girl Scout Cookie season. This is Us's young star tweeted about selling cookies at the the SAG Awards, proving she knows she's a Girl Scout to the core. Because when it's time to move that merchandise, it's time — red carpet or no red carpet.

As Us Weekly reported, the award-winning ensemble drama's Mackenzie Hancsicsak, who plays a young Kate Pearson on the NBC show, spent the weekend schmoozing it up at the Screen Actors Guild Awards at Los Angeles' Shrine Auditorium. But she made sure to put in a plug for her friends and co-workers to pick up some Tagalongs and Do-si-dos while they were out and about at one of the entertainment industry's biggest nights.

"If anyone at SAG Awards wants some girl scout cookies, I'm at table 34," the actress tweeted. (And speaking from experience, a lot of troops out there are super-competitive, so she may not have been just joking, guys. On Twitter, she also mentioned she was bringing Thin Mints in her purse, assuming some movie stars just don't have the patience for a pre-order. Or maybe she just was anticipating needing a snack.)

Hancsicsak, 11, has long been public on her social media about being part of the popular nationwide girls organization, and a careful inspection of her Twitter pic shows the young star posing with Parker Bates, with both of them holding a box of Samoas, as CBS News reported (and this particular coconut-chocolate mixture can't be beat among the whole array of cookies, I say.)

And while This is Us won the award for best ensemble in a drama series, as CBS News added — meaning Hancsicsak and her castmates including Milo Ventimiglia and Chrissy Metz each won a statuette — Hancsicsak's Twitter noted what the young performer really wanted for the ultimate prize: The chance to sell her stash to Ellen Degeneres, a former Girl Scout who once spent $3,500 on cookies, according to Access Hollywood.

"If @TheEllenShow ever wants us to come visit her show, my troop will bring cookies for her whole audience!" the actress, who plays the childhood version of Metz's character, added on Twitter. (Sterling K. Brown also won for his performance on the show, Cinemablend reported.)

I love that this young star is so normal in her off-the-set life. And after all, Hancsicsak might remember the fact that, a couple years back, proud Girl Scout dad Chris Rock really set the cookie bar high by cleaning up at the 2016 Oscars (including fellow Samoas fan Mindy Kaling)... to the tune of $65,000 worth of cookies, as Entertainment Weekly reported.

With such great PR going into cookie season, Girl Scouts of America can't be too upset right about now. The group's Twitter account responded enthusiastically to the young star: "Such a clever idea! We know you guys will do an amazing job this cookie season. Don’t forget to remind everyone that those boxes are packed full with empowermint!"

This is such a cute story. I hope I will remember it when I sit outside my neighborhood grocery store in the cold in the weeks to come as my daughter does her bit selling cookies for the local troop. After all, not all Girl Scouts can sell cookies to stars at awards shows.