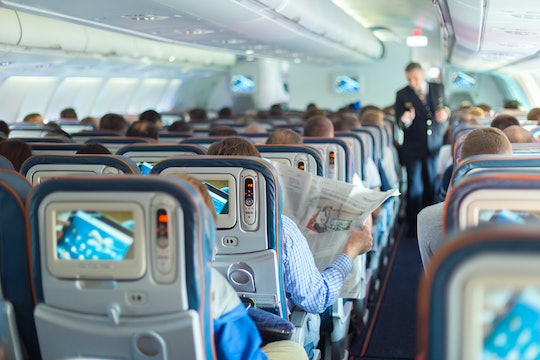 Yes, You Have Rights On An Airplane, But The Airline Does, Too

It's not uncommon to hear stories about people getting kicked off of airplanes for odd reasons these days. Sometimes these reasons are just that: bizarre (as with the passenger who recently made news for trying to bring an "emotional support peacock" on a flight). Other times, though, they seem unfair, too — as with the woman who claimed she was recently removed from her flight for talking about her period. At some point you've got to wonder: What are your rights as a passenger on an airplane, anyway? Can they just throw you off a flight any old time, for any old reason?

In a word, yes — but it's not exactly a black and white issue.

"Ultimately, the crew has the ability to have anyone removed from a plane at their discretion," Henrik Zillmer, CEO of AirHelp, an organization that advocates for air passenger rights and compensation, tells Romper.

"However, this policy is truly meant for unruly passengers who are compromising the safety of themselves or others. That could be something as obvious as a physical altercation with another passenger, or as simple as refusing to wear their seatbelt."

What constitutes "unruly" is a question people have been asking for some time now, particularly since a disturbing video went viral last April in which Dr. David Dao was violently dragged off an overbooked United Airlines flight for refusing to give up his seat. Since then, there have been similarly questionable incidents. In September, a woman was forcibly taken from a Southwest flight by two police officers when she asked to have two dogs removed from the plane, claiming to have a "life-threatening pet allergy." In January of this year, another video went viral of a woman who was removed from her American Airlines flight after a "disagreement" which apparently involved standing in line for the bathroom.

But these two most recent incidents are especially perplexing, to say the least: In the first, 24-year-old Beth Evans was reportedly removed from an Emirates flight because the staff overheard her telling her boyfriend that she had cramps before takeoff. As her boyfriend Joshua Moran explained to The Sun, flight attendants began grilling Evans on her pain (which she described as a "one out of ten"), insisting that she undergo a medical evaluation; when no doctor could be found on board, she was forced to leave. Romper reached out to Emirates for comment but has not received a response at the time of this writing.

To make matters worse, the couple was forced to pay hundreds of dollars each to rebook their flights, The Sun reported.

The incident involving the gassy passenger is an even stranger tale, in some ways: A Transavia Airlines flight made an emergency landing earlier this month when a fight broke out between a man and the passengers sitting next to him because, "Despite their pleas, the man insisted on unapologetically farting throughout the flight," according to Travel + Leisure. The oddest part, perhaps, is that the airline also removed two women who happened to be sitting in the same aisle as the men but insisted they had nothing to do with the argument and did not even know the men involved (the women, sisters, are now suing Transavia). Romper reached out to Transavia for comment but the airline has not responded at the time of this writing.

In a statement released to Metro, Transavia defended their employees' actions, saying:

“Our crew must ensure a safe flight. When passengers pose risks, they immediately intervene. Our people are trained for that. They know very well where the boundaries are. Transavia is therefore square behind the cabin crew and the pilots.”

"The recent incidents certainly fall into a gray area, which is part of a larger issue about the lack of transparency in this industry," says Zillmer.

Lacchab and her (unnamed) sister are hardly alone in their litigious response. Many passengers who feel they've been unfairly removed from a flight sue airlines, and these suits are sometimes successful. When Dr. Dao sued United after his viral incident, for example, his case was settled out of court, reported ABC 7 Chicago, seemingly to both parties' satisfaction.

Still, there's nothing to say that this kind of thing won't continue to happen. So what should you do if you find yourself in a similar situation? And is there anything you can do to prevent it?

Maybe not. As an article in USA Today explained, "there are three things that govern a carrier’s relationship with its passengers: contracts of carriage, the U.S. Department of Transportation and laws approved by Congress."

The law handles certain policies, such as the prohibition of smoking on flights, while the Department of Transportation regulates potentially "unfair and deceptive practices," such as price-gouging. Contracts of carriage, however, are where the little details get hammered out. These vary from airline to airline, and every passenger accepts one upon purchase of a ticket — but because they tend to be very long (nearly 37,000 words in United's case), many passengers don't bother to read them through. And that's unfortunate, because there are probably lots of little rules and provisions in there you'd never suspect. United, for example, retains the right to remove passengers from flights for dozens of reasons, including being barefoot and smelling bad.

“Those contracts are well thought through. They are generally fair and balanced, and they reflect the market,” Roy Goldberg, a partner at Steptoe & Johnson who practices aviation law in Washington, D.C., told USA Today.

And while, as mentioned, every airline is going to be slightly different, it's worth noting that all four of the largest airlines (United, Southwest, American, and Delta) have similar provisions in their contracts, which include the denial of passengers who are improperly clothed, visibly intoxicated, unable to sit in a single seat with the seat belt properly secured or "who have or cause a malodorous condition."

So apparently Transavia was likely well within its rights to make that emergency landing over the man with digestive troubles (even if the removal of the two women sitting nearby doesn't seem to add up).

One thing's for sure: If you do have some sort of onboard dispute, it's in your best interest to be as cooperative as possible. As an article in TIME states, federal aviation regulations dictate that “no person may assault, threaten, intimidate, or interfere with a crew member in the performance of the crew member’s duties aboard an aircraft being operated.” Airlines can interpret that regulation to kick passengers off flights for "a wide variety of reasons, and regulators and local law enforcement generally back them up," the article says.

"If you or your family are asked to disembark a flight, you should comply to avoid further issues in the moment," says Zillmer.

"However, you should absolutely fight for your rights and hold the airline accountable once you disembark. Ensure you get a copy of the proper paperwork from the airline and document all extra expenses that result, such as hotels, new tickets, meals, etc. Airlines are liable for disrupted flights, and displaced passengers may be able to claim compensation for these additional expenses depending on the cause of the disruption."

In other words, you may not have many rights as a passenger, but it helps to know the ones you do have!