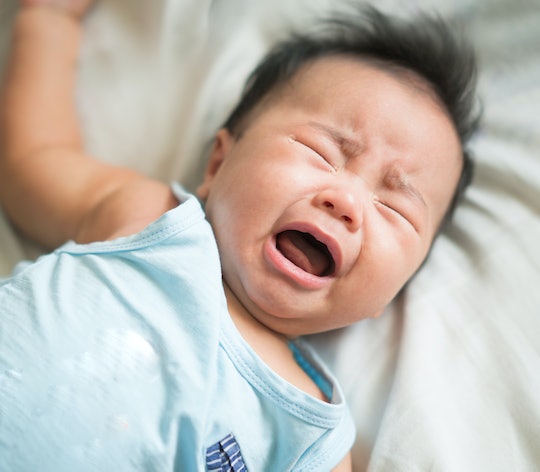 I always wonder what my son would sound like when he's an adult. Both his father and I have deep voices, but that doesn't mean so will our son. Plus, dad and I have radically different vocal tones — his is smooth and even, while mine is raspy and strained. (Thanks, Brooklyn upbringing!) So I can't help but be curious about how my toddler's voice will change. Now, I may have some insight. According to new research, your baby's cry might predict how their voice will sound when they're older.

A new study published last week in the journal Biology Letters found that the pitch of an infant's cry at 4 months old may indicate their vocal pitch five years later, according to Discover. In particular, a group of researchers from France and the United Kingdom revisited years-old recordings they made of 4 month olds crying, and reconnected with those children, now age 5, to capture their current voices, as Discover reported.

And what they found is that more than 40 percent of vocal differences at 5 years old could be explained by vocal differences when the children were infants, according to the study's findings. Pretty fascinating stuff, if you ask me.

The researchers wrote in their study:

These findings suggest that a substantial proportion of between-individual differences in voice pitch, which convey important biosocial information about speakers, may partly originate in utero and thus already be present soon after birth.

Study co-author Nicolas Mathevon, a professor at the University of Lyon in France, explained this further in an interview with The New York Times. He told The Times:

In utero, you have a lot of different things that can alter and impact your life — not only as a baby, but also at an adult stage.

This isn't the first time, though, that the researchers have looked into what determines how a person will sound when they're older. Mathevon was also involved in a 2016 study published in the journal Royal Society Open Science that discovered that a child's vocal pitch at 7 years old old is one of the strongest predictors of their voice when they're an adult.

In fact, the research team found that the pitch of a person's voice at age 7 explained 64 percent of the difference of their voice when they're older, according to the study's findings. That's even when accounting for other influential factors, such as your sex, size, and weight, Discover reported.

The researchers wrote in the Royal Society Open Science study at the time:

Given that a child's voice pitch hints at the voice pitch he will have as an adult, this attribution of voice-based social labels may begin very early in life, and remain consistent throughout a person's lifetime.

Although the Biology Letters study published last week does offer valuable insight into what could determine a person's voice as an adult, it's also very limited in that regard.

Their experiment only included 15 French children — nine boys and six girls — making the sample size considerable small, according to The New York Times. So the researchers do recognize that further studies that involve a bigger sample size is needed to get a fuller picture, The Times reported. Not only that, but the future studies would also need to involve children from a variety of backgrounds so that there is broader representation, the researchers told The New York Times.

The research team did start off with a larger group of participants, but Mathevon told The New York Times:

Even still, although a lot may be unknown, the studies do give parents something to ponder the next time they hear their babies cry. Too bad I don't remember how my 3-year-old sounded at 4 months.