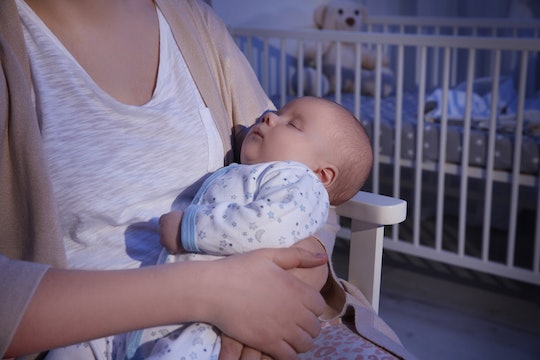 Your Baby's Sleep Troubles Might Be Due To Inactivity, New Study Says

Getting babies to sleep during the night is a challenge within itself. New parents can attest to plenty of sleepless nights and while some are to be expected, is there one thing parents are missing? A new study found that your baby's sleep trouble might be due to inactivity. It's one thing parents can consider when looking to solutions for all those sleepless nights.

Before that, though, babies wake up for a variety of reasons. Sometimes they need to be changed; sometimes they need to eat. In addition, your baby is still developing a rhythm. They might sleep 16 hours or more a day, as noted by Mayo Clinic, but they don't understand the whole sleep-all-night thing.

For babies that have either slept through the night before or are around the right age, there's a lot of reasons why that can't or won't sleep. You should rule out any possible health concerns with your baby's pediatrician. After that, though, a new study suggests that parents may want to consider if inactivity is playing a role.

Researchers from Michigan State University recently published a paper in the journal Infant Behavior and Development. As noted by the study's abstract, researchers worked with 22 6-month-old infants to examine low-intensity physical activity and sleep behaviors.

Essentially, they wanted to see if physical activity and sleep had any influence on each other. Janet Hauck, an assistant professor of kinesiology, who specializes in infant motor intervention research, said, according to EurekAlert!:

We know physical activity and sleep influence each other and are strongly associated with growth in older children and adults. Our findings suggest that this association could emerge as early as infancy, a critical developmental period.

"Babies who slept less overall in the 24 hours and had the least amount of nighttime sleep had more overnight feedings and were significantly less active during the day," Hauck said, according to EurekAlert!.

So, how do you get your baby into a decent sleeping schedule? It's all about creating routines and consistency, according to Hauck, who told MSU Today, “Parents can make 12 hours of sleep or more a priority for their baby by creating a bedtime routine and being consistent with it."

Hauck also advised, according to MSU Today, that parents should play and interact with their baby when they're awake, as well as do some supervised tummy time a few times each day.

Bedtime routines remain important throughout childhood, as noted by WebMD. They help kids develop good sleep habits that will carry over into adulthood. This study highlights that it's important to get started on developing those routines early.

Your own sleeping habits will thank you for it.

More Like This
We Have To Talk About This Fish That Will Pat Your Baby's Butt Until They Fall Asleep
Cry-It-Out: The Popular Sleep Training Method, Explained
What Exactly Is The Ferber Method? The Sleep Training Approach, Explained
Baby Growth Spurts: When They Happen & What To Expect