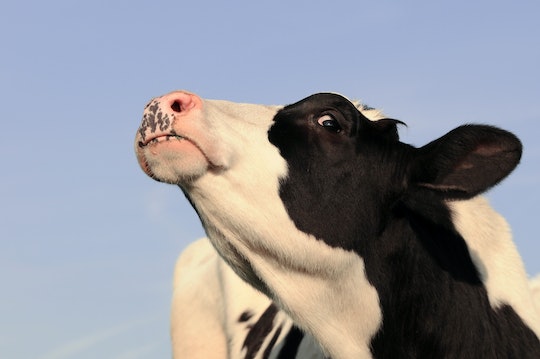 10 Die-Hard Stories About Milking Yourself

The previous column, in which Haely was forced to milk herself into a public toilet, struck a chord. Dozens of parents out there volunteered their tales from the breastfeeding trenches, fondly recalling the times they milked themselves into Sonic cups, into bathroom sinks, into urine sample collectors and, in at least two cases, into the arms of a helpful bestie (get you a friend who...). Those of us blessed enough to have milk-filled bosoms have, it seems, frequently found that our cup runneth over, and we have no choice but to use the world as our pumping receptacle. So we've rounded up the best stories here of boobs fit to burst, and the extreme measures taken to address an escalating situation.

To moms everywhere — we see you. And we're dying from these stories.

My first baby was around 8 weeks old. My husband and I had a bunch of friends coming into town for the big Texas Tech versus Baylor game. We’re at the tailgate having a great time when all of sudden the sounds of a baby crying nearby initiated “the letdown.” In order to avoid an embarrassing leakage situation, I quickly ran to the car to use my hand-held pump. After frantically looking everywhere, it turned out I had forgotten to pack it. Desperate, I stared at my two options... the beer bottle or the Sonic cup. Obviously I chose the trusty Sonic cup. So, with Sonic cup in hand and all self-respect out the window, I slouched down in the floor of the middle row of our car at Baylor stadium and milked myself into a Route 44.

Yep. First time was in the Starbucks bathroom as I was dying. My little wouldn’t latch and was screaming his head off while my mother helpfully pointed out he was hungry. No sh*t.

Exactly one month and two days after the birth of my rainbow baby, I was ready for my first night out at a World War II-themed ball. All dolled up in my ‘40s attire and armed with a belly that still had that after-birth jiggle, I had planned to pump in the car. Flanges locked and loaded, with tubes and cords in place, I got the handy car charger plugged in and turned the nob to what I thought was an appropriate “suction number.” But… there was no sucking. Convinced I had hooked it up wrong, I looked over the thing. I knew it wasn’t broken because I had turned it on when I plugged it into the wall at home. Then it hit me like a ton of bricks: the cigarette lighter outlet fuse was busted and had been for years.

I have never spent so much time inside of a Port-a-Potty. Ever.

I looked at my friend, still wearing my bandana bib and basically said, “What’s the worst that could happen.” We got in line for our drinks and I started to feel my already tight shirt getting a little tighter. We had to have been there for at least two hours before I felt a strange sensation of pins and needles around my boobs and then a warm wet feeling in my bra. Ugh, now I’m leaking milk and the lower part of my bra is wet.

We walked towards the food trucks to grab a bite and things started to get painful and hard. I was not ready to throw in the towel but if I couldn’t get relief soon we were going to have to leave.

I was contemplating my fate with my friend when a lovely individual, who I can only describe as a pinup girl covered in tattoos, came up to me and said she had been listening and could help. We stood there as she tried to explain to me how to hand express the milk. The thought of massaging my bosom and milking myself had honestly never occurred. To make matters worse there was an extreme lack of privacy at this event. My options were walk back to the car or… the Port-a-Potty. I have never spent so much time inside of a Port-a-Potty. Ever. I had to poke my head out twice just to ask the pinup girl if I was doing it right.

After what felt like was forever, I escaped the stinky tomb of all sorts of bodily fluids and got in line for a double rum and coke. If it wasn’t for the pinup girl, my night would have been a bust, pun intended.

The number of times I’ve milked myself into sinks or toilets is too high to count. Always gotta be careful it doesn't shoot onto the walls. I've also had people walk in on me with my boobs out milking them into the sink and it's so embarrassing...

I was shopping once and had filled up to the point of pain but baby was sleeping. Not needing a feed whatsoever. I sat in my vehicle with extra breast pads and had to express milk for 20 minutes in a parking lot. It was painful, messy and eye-opening. I'm thankful I didn't have an audience.

I was on a bachelorette weekend at Joshua Tree with a 4-month-old at home, and spent approximately half of the dedicated margarita-drinking hours I had there sitting with a hand pump wringing milk out of my boobs so I didn't lose my breastfeeding super powers while away. I attempted to freeze and transport some of it home, but when you're out hiking in the desert, there's no point. I tossed multiple jugs of golden breast milk at some cacti out there, and like to imagine there's a really f*cking lush fern growing there today. A little pump-and-dump oasis out among the pink rocks.

I once milked myself off a porch in the middle of the night whilst at a "futurism" retreat up in Omega.

I've milked into toilets, bushes, faces, and cups. We gotta do what we gotta do!!

My second baby was 8 weeks old. I had a meeting with the head of a magazine about a job as a freelance host and producer. I left my little babe with my mom. It was the first time leaving him for more than an hour stretch, but I had timed the whole thing perfectly in my head: Fifteen-minute drive to the meeting, one-hour meeting, and 15-minute drive back. I’d be home in time for the next feeding.

I leaned over the sink and started milking myself. Right there. In the unisex bathroom at the Viceroy.

I arrived at a boutique hotel and parked myself in the lobby bar where this meeting was supposed to go down. My phone rang and it was the guy’s assistant informing me that “Daniel” was running 45 minutes late from his last meeting and that I should get a drink at the bar and he’d be there as soon as he could. Holy. Fucking. Sh*t. I thought about my baby, at home, without me. My boobs immediately started to tingle and fill up. No no no!!! What do I do? I called my mom and tried to explain all the parts that go with the pump to see if she could Uber it all to me. Not a chance.

I quickly got up and raced to the (unisex) bathroom, stripping down to my bra as milk started to leak out of both sides, getting everywhere. I leaned over the sink and started milking myself. Right there. In the unisex bathroom at the Viceroy. After that happened, I went out and waited for “Daniel” as if I hadn’t just lived that horror. He arrived, predictably 45 minutes late and I’m pretty sure only I could smell the dried breast milk on my dress.

I flew up to San Francisco to pitch a major Venture Capital fund for the next financing round for my startup TotSquad, a baby services company. My daughter flew everywhere with me, hitting six states by 6 months old, but once she was crawling at 7 months, I decided it was better to leave her home and pump on the road.

The pitch meeting ran long, ending after 5 p.m., and I urgently needed to pump before heading back to the airport. The secretary who manages access to the "Mother's Lounge" was already gone for the day, so I really awkwardly had to ask the childless VC bro if there was somewhere I could pump. He set me up in their kitchen. ::facepalm:: I closed the break room door and realized it wouldn't lock... Panic! I put the chair back up against it from the inside and he put some very awkward sign on the other side so no one would bust in on me... but let's just say I didn't get a whole lot of milk out during that session.

And also, they passed on the investment. Ha!

And a bonus story:

I was admitted for emergency surgery to a very busy hospital and had been left without pump or anything for 14+ hours when I finally had to hand express on my gurney in a hallway in front of the nurses' desk. I need a container, and the nurses couldn't figure it out, so I used the urine cups. They're sterile right?