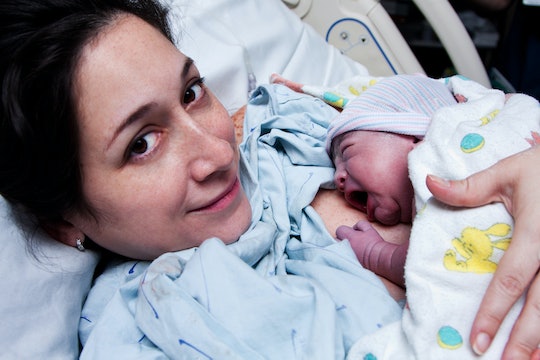 Here's How Your Brain Reacts To Childbirth

They say that becoming a mother changes everything about your life. And, in my experience, it's true. After having a baby, you, your family — and likely your body — will never be the same. But, did you ever wonder what happens to your brain during childbirth? I can tell you that I didn't, but now that I've had babies, I'm definitely curious to know how my babies have changed my mind. Literally.

Turns out, your brain goes through some major physical, hormonal, and emotional changes during childbirth, and may never be the same again, either. That might actually explain everything that occurs postpartum, from how we bond with our babies to whether or not we can find our car keys a month after giving birth. According to the Society for Endocrinology, your brain releases hormones during childbirth to tell your body what to do. Then the physical process of birth tells your brain to make more hormones, which creates an intricate cycle, impacting your physical and emotional state during labor, birth, and beyond.

That's not all, though. Researchers have found that pregnancy and childbirth actually changes your brain physically, too. One study conducted by researchers at Yale University showed that some parts of your brain get bigger right after you give birth. Another study published in Nature Neuroscience showed that other parts lose grey matter, which, according to the study authors, might play a role in how you learn to become a parent.

According to the Society for Endocrinology, during childbirth your brain and body work together to get the job done. Different parts of your brain produce and release a cocktail of hormones, which in turn causes your body to do its thing during labor and birth — including physical changes, like cervical changes, labor contractions, pain relief, and lactation. In response, these physical processes cause even more hormones to be released, and so on and so forth, like an intricate dance, proving once again just how amazing birth is.

Brain changes during childbirth can also impact your emotions, which is probably not surprising to anyone who has been through the experience. As reported by Live Science, researchers at Bar-Ilan University in Israel have examined how the hormone oxytocin, which is released before, during, and after childbirth, impacts moms' ability to bond with their babies and their potential risk for postpartum depression.

In a study published in the journal Nature Neuroscience, researchers scanned the brains of first-time moms before they got pregnant, soon after birth, and during the postpartum period. They found that moms actually lost grey matter in their brains at some point during pregnancy. As reported by Scientific American, while the researchers don't fully understand why this happens, they postulate that these changes might actually be nature's way of teaching new moms to focus more on their babies and less on other things. These physical to moms' brains during pregnancy might stay with them for two years or longer afterward, too.

Another study found that other parts of moms' brains might actually get bigger during pregnancy and birth. As reported by Live Science, researchers from Yale University looked at images of moms' brains before and after childbirth, and found increases in the size of specific areas of the brain, including the amygdala and hypothalamus, which, according to the study published in the journal Behavioral Neuroscience, could play a unique role in helping you develop parenting skills. Who knew?

According to an article published in the Journal of Midwifery and Women's Health, prolactin — one of the hormones your brain produces — is responsible for lactation and milk production. This is why your breasts grow and feel tender during pregnancy. However, it's not until after your body expels the placenta that this hormone stimulates milk production. This is because your placenta is a major source of progesterone, which can interfere with that process, and also why, according to Johns Hopkins Medicine, moms with a retained placenta can experience delays in their milk coming in or low milk supply.

Now, all of this is not to say that parents who don't give birth to their babies can't bond with them. As reported by Science Daily, one recent study showed that dads get similar boosts of oxytocin from caring for their kids, which makes total sense and proves, once again, how becoming a parent is life-changing, no matter how you got there.

More Like This
Pitocin Induction: What It Is & The Play-By-Play
This Is How Your Water Breaks During A C-Section
Can Swimming Induce Labor? Experts Weigh In
Can You Do Zumba While Pregnant? Experts Weigh In