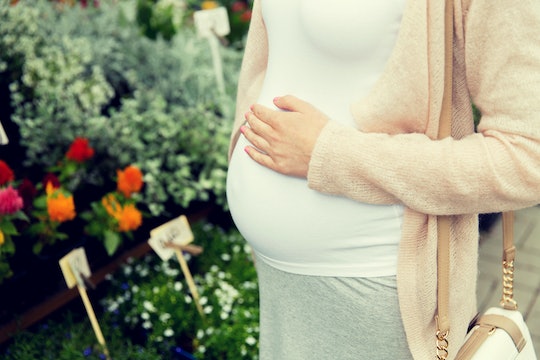 Your Pesticide Could Be Shortening Your Pregnancy, New Study Finds

Midwest born and raised, I’ve always been a little curious about how your region can impact health, including within pregnancy. Outsiders don’t know much about the Midwest, but they do know that we farm a lot; good for the economy, but not always so great for your health. In a recent study, researchers found that more than 90 percent of a group of pregnant women in Central Indiana had detectable levels of the herbicide glyphosate, an active ingredient in Roundup, a frequently used pesticide, in their system. (Roundup did not immediately respond to Romper's request for comment.)

The study, conducted by researchers from Indiana University and University of San Francisco, was the first of its kind to examine glyphosate levels using urine as a direct measure of exposure. And its results that more than 90 percent of women studied carried detectable glyphosate levels are worrying, because animal studies found that in utero exposure to glyphosate alone has been linked to birth defects and fetal loss in other mammals. Low exposures in rats led to fetal toxicity risks like dilated hearts and visceral anomalies, while rabbits saw late embryonic deaths, according to the study.

If you’re not an avid gardener or farmer yourself, you probably don’t know what exactly Roundup is or looks like. But, that doesn’t mean it hasn’t been used on your products. In 2007, the Environmental Protection Agency reported that glyphosate was the most used active pesticide ingredient; it has held that spot since 2001.

There have been no previous studies on the effect of glyphosate in human pregnancy, but the researchers within this study reported that the heightened glyphosate levels correlated significantly with shorter gestational length. “There is growing evidence that even a slight reduction in gestational length can lead to lifelong adverse consequences,” Shahid Parvez, the principal investigator of the study, told Science Daily.

While this study needs to be repeated with a larger, diverse sample, the method of glyphosate exposure needs further discussion by itself. According to Parvez, none of the tested drinking water showed glyphosate residues, which means the chemical is likely eliminated in the water-treatment process. However, the bad news is that the likely criminal is most likely dietary intake, like caffeinated beverages and genetically modified foods.

It makes sense, then, that a study conducted with women in the Midwest would show such high levels of glyphosate. Due to corn and soybean production, use of glyphosate is heaviest in the Midwest, with residues being found in both the environment, major crops, and other food items.

Glyphosate has been featured in the media before, primarily due to its connection with the infamous Monsanto, a modern agriculture company. In a recent interview for Acres USA, re-published on Alternet, Carey Gilliam laid out the history of the chemical, which was originally synthesized by Swiss Chemist Henri Martin in the 1950s during a pursuit for new pharmaceuticals. According to Gilliam, the weed-killing magic within glyphosate was unlocked by John Franz, a Monsanto chemist, and from there the chemical was brought to the market in the form of Roundup in 1974.

While the EPA insists that glyphosate is safe, Gilliam told Acres, Monsanto is notorious for trying to influence public agencies and control data.

Gilliam said a clear example of Monsanto influencing public agencies can be found within a 1983 mouse study. “The study in question involved 400 mice,” Gilliam told Acres. “The EPA’s toxicology experts looked at the study and came to the obvious conclusion: ‘This stuff causes cancer.’”

In memo after memo, EPA toxicologists pushed back against Monsanto’s arguments that they just weren’t looking at the data right. “Our viewpoint is one of protecting the public health when we see suspicious data. It is not our job to protect registrants from false positives,” was written at the conclusion of an archived document on the mouse study.

Monsanto ended up hiring a pathologist of its own and, after a decade, the EPA finally relented. In 1993, the EPA accepted Monsanto’s study and conclusions that found glyphosate safe, although some scientists refused to sign off on the document, according to Gilliam. Monsanto did not immediately respond to Romper's request for comment.

In the late 1970s and 1980s, a Senate Subcommittee on Health and Scientific Research discovered fraudulent practices at Industrial Bio-Test Laboratories (IBT), a major testing laboratories that conducted many of the toxicological studies for Monsanto and other pesticide companies. Three top executives of IBT were indicted and convicted in 1983 for claiming to have conducted safety tests on pesticides when, in reality, they hadn’t according to The New York Times. This falsification led to the EPA declaring that pesticides were safe, when now there were no studies showing that to be true, and a scramble to replicate the fraudulent data.

However, those three convictions didn’t put the problem to rest, and the issue arose again in 1991 with Craven, another major testing laboratory. According to an article in the New York Times’ archive, Craven was responsible for analyzing samples of fruits, vegetables, grains, and other foods for trace amounts of insecticides, weed killers, and other chemicals. For the EPA, those studies were important in determining the levels of pesticide that could be allowed in food.

Monsanto’s public history is long and complex, making the true effects of glyphosate difficult to track. But, as shown with the most recent study, people are ingesting high doses of this chemical and it’s time researchers begin to look into the effects it will have on future generations. Perhaps, with enough voices, the real data will have a chance to stick around.