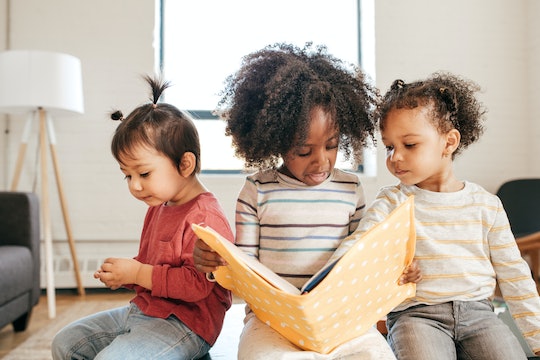 Your Kid Is Noticing Race Way Before You Think They Are, According To A New Study

While many adults think children should be around 5 years old before they're introduced to the topic of race, a new study published by the American Psychological Association found parents tend to wildly misjudge children's ability to process the subject. In fact, researchers argued kids notice race well before parents bring it up and can develop racist beliefs as early as preschool. What's more, by delaying when they speak with children about race, adults may actually make it more difficult to correct misperceptions.

"Children are capable of thinking about all sorts of complex topics at a very young age," Jessica Sullivan, PhD, an associate professor of psychology at Skidmore College and one of the study's co-authors, said in a statement shared with Romper. "Even if adults don't talk to kids about race, children will work to make sense of their world and will come up with their own ideas, which may be inaccurate or detrimental."

In surveying more than 600 adults — 40% of whom were parents — researchers found that participants believed the earliest age adults should first talk to children about race was near the child's fifth birthday. However, as researchers pointed out, previous studies have shown that children become aware of race as infants and that infants as young as 3 months old can show a preference for faces from certain racial groups. Another from 2010 found children begin to use race to categorize faces at 9 months old. And another study from 2012 found that by age 4, children in the United States have associated white people with "high status markers" like wealth.

In delaying important conversations about race, researchers have cautioned parents, caregivers, and adults could ultimately make it more difficult to change any misperceptions or racists beliefs children may have developed. "Even if it's a difficult topic, it's important to talk with children about race, because it can be difficult to undo racial bias once it takes root," Leigh Wilton, PhD, one of the study's co-authors and an assistant professor of psychology at Skidmore College, said in a statement.

While toddlers can't comprehend complex topics, Wilton argued adults can approach race in an age-appropriate way. "You can have a conversation with a toddler about race that is meaningful to them on their level," she said.

And thankfully, there are a myriad of helpful resources from trusted sources for parents and caregivers unsure of how to address the topic of race with a young child. Earlier this year, PBS Kids hosted a virtual panel titled Talking to Children Authentically About Race and Racism, which can be watched online for free. To further help parents, PBS also has a wealth of additional articles, book recommendations, and even special race-focused episodes of beloved children's shows available online. Parents magazine also has an age-by-age breakdown of how adults can speak to kids about race.

"If we wait until a child is old enough to ask a tough question about the history of racial violence,' Wilton said, "then it will be that much harder to talk about if there haven't been any meaningful discussions about race earlier in their lives."