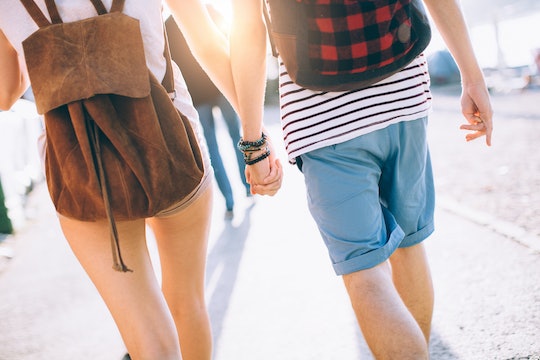 Your Kid Is Probably Going To Have Sex As A Teen, According To Science

Sex is a natural part of life. Humans do it. Animals do it. Plants, in their own way, do it too. Yet, shame around sex and sexuality still prevails, and that's putting young lives at risk. An article published Friday by the MIT Technology Review found that youth in rural states aren't getting the potentially life-saving HPV vaccine, in part because of the stigma attached to sexual activity among teens. But let's face it, your kid is probably going to have sex as a teenager, so here's how to keep them safe: accept that truth sooner rather than later because your child's health depends on it.

About 46 percent of students in high school have sex, according to Advocates for Youth. And there's enough evidence to prove that parental acceptance is critical in order for teenagers to have healthy and safe sexual lives. According to Advocates for Youth, one study found that youth who had open and honest conversations about sex, birth control, and sexually transmitted diseases with their parents were two times more likely to use condoms during intercourse. Another similar study also found that teens were three times more likely to use condoms when their mothers talked to them about condom use prior to their first sexual encounter than if they didn't. Three times more likely.

Proper and consistent condom use significantly reduces the risk of transmitting or contracting an STD or HIV. And the risk of unintended pregnancy is greatly reduced by proper birth control use. That's information directly from the U.S. Centers for Disease Control and Prevention. Yet, many parents still avoid the "sex talk" for a variety of religious, cultural, or personal reasons.

But that avoidance is only hurting children and teens. Take abstinence-only education, for example. The idea that sex should wait until marriage is an inherently religious one that has penetrated our school system. Both parents and conservative lawmakers continued to push for this type of curriculum in the classroom, even though research has proven it doesn't work. According to Glamour, another study published this month found that abstinence-only-until-marriage programs do nothing to actually deter or delay sexual activity, nor does it change sexual behaviors that can be considered risky, such as not using condoms.

In fact, according to Advocates for Youth, teenagers are more likely to report emotional distress, lower self-esteem, problems at school, drug use, and sexually indiscriminate behaviors when they lack parental acceptance and communication when it comes to sex. On the other hand, youth who have open, honest, and accurate talks with their parents about sex are more likely to delay having sex, and feel happier in their lives. That means reducing their STD and HIV risk, as well as the chance of an unintended pregnancy.

As a mom, I understand not wanting to think of your kid having sex as a teenager. Not because there is anything wrong with sex, but because, for as natural as it is, sex is a pretty heavy thing. That's especially true for a developing adolescent. I know I wasn't the smartest about sex when I was in high school, despite having access to pretty decent sex education.

But the fact is, my son may have sex when he is 15 years old, and that's something I need to accept. And I'd rather arm him with all of the facts so that he can make the smartest decision for himself, rather than avoid the topic all together and harm his health.