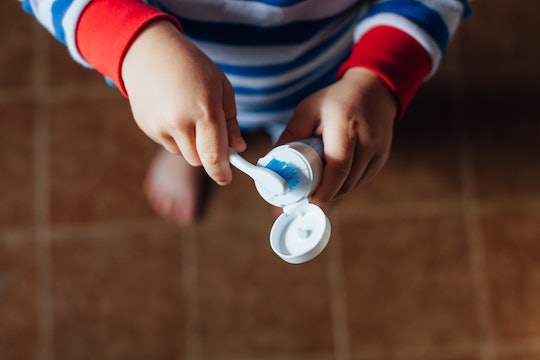 ATTN: Parents — Your Kid Is Probably Brushing Their Teeth Wrong

It's not uncommon for parents — especially new ones — to worry that they're doing everything wrong. Unfortunately, the Centers for Disease Control (CDC) released a report on Friday, Feb. 1 stoking these fears, at least where it concerns dental hygiene. As it turns out, many kids are brushing their teeth incorrectly, per the CDC's report.

It's hard enough to get your kids to brush their teeth, let alone do it right. Making matters even more difficult? Many adults, for instance, don't even know how to brush their pearly whites correctly. Case in point: Did you know that it's best to hold your toothbrush at a 45-degree angle to the surface of the teeth while brushing in small circles? I didn't. Sigh.

My personal anxieties about dental hygiene aside, it's probably a good idea parents look over the CDC's new report to make sure they're following best practices in the teeth brushing department. Why? Well, about 40 percent of kids aged three to six years old are brushing their teeth incorrectly because they use too much toothpaste, according to Fortune.

Kids below the age of 3 should use "a smear the size of a rice grain," while children aged 3 to 6 years old should use "no more than a pea-sized amount," according to CBS New York.

“Fluoride use is one of the main factors responsible for the decline in prevalence and severity of dental caries and cavities (tooth decay) in the United States,” according to People.

Given the risks of too much fluoride at an early age, the CDC recommends parents carefully monitor their child's dental hygiene routine.

“Careful supervision of fluoride intake improves the preventive benefit of fluoride, while reducing the chance that young children might ingest too much fluoride during critical times of enamel formation of the secondary teeth,” the report advises.

Chicago-based pediatric dentist Dr. Mary Hayes also told ABC7 New York: “You don’t want them eating it like food. We want the parent to be in charge of the toothbrush and the toothpaste.”

Of course, this report doesn't mean your child should stop using fluoride toothpaste. Fluoride, after all, is very important.

"Fluoride is an important mineral for all children. Bacteria in the mouth combine with sugars and produce acid that can harm tooth enamel and damage teeth," the website Healthy Children states. "Fluoride protects teeth from acid damage and helps reverse early signs of decay."

In fact, some dental groups recommend using a grain-sized amount of fluoride as soon as your child's baby teeth come in.

“By starting earlier, we can effectively reduce a lifetime of disease for a lot of kids," Dr. Jonathan Shenkin, a spokesman for the American Dental Association and pediatric dentist, told The New York Times.

Translation: fluoride isn't something to fear, but it's important that parents monitor their child's intake. Less is more, in this case.