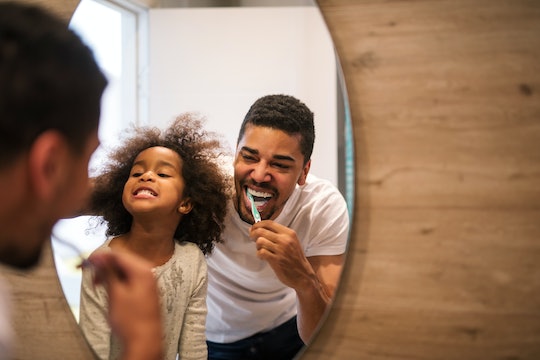 Your Kid’s Bedtime Routine Could Affect Their Health As They Age, New Study Finds

Kids are notorious for not always enjoying their bedtime routine — from hating baths to rebelling against sleep itself. It can be tempting for parents to give up on the routine altogether, wondering what's the point of fighting every single night, but don't give up! A new study has found that your kid's bedtime routine could help them sleep better, improve their performance in school, and set them up for success as they age.

To reach this conclusion, researchers involved 50 parents of kids aged 3 to 5 in the study. Parents were asked about their children's bed time, frequency of tooth brushing, snacking and drinking in the evening, and if kids were allowed to read or use electronic devices before bed, according to The Sun. After, the researchers compared those results with school and dental reports.

By comparing this data, researchers were able to conclude that not only did kids with regular bedtime routines have better emotional wellbeing, but they also had better teeth, according to The Sun. Bedtime routines, in other words, are important for pretty much every aspect of a child's health: emotional, psychological, and physical.

The overall importance of a regular routine with kids cannot be understated. As noted by the Child Development Institute, routine allows children to know what is going to happen, and who is going to be around them. It's especially important as they get older, because this confidence in the events of the day gives them a little more courage to think and feel independently. Kids are still learning how the world works, after all. Imagine being plopped down somewhere with no idea how to navigate and no regular routine to fall back on; it wouldn't be fun.

Bedtime routines help children learn how to wind down for the night and teach them how to take care of their bodies. Most kids would gladly skip brushing their teeth if it wasn't part of a daily routine. Even if parents might think that part of a routine isn't important, if you want a child to do something later in life, stay consistent. It's better to make a habit of it now than to struggle later.

Encouraging habits also develops better performances in memory, attention, and mental flexibility, as noted by The Herald. It makes sense. For kids to participate in a routine, they have to remember the next steps and pay attention throughout.

"There is also an association between emotional and psychological wellbeing in parents and children, with those children having a non-regular bedtime routine experiencing more frequent behavioral difficulties than other children," the study additionally noted.

For anyone struggling with bedtime routines now, make sure to review yours and ask yourself: is it consistent? Small details can change as kids do, but the basics (like changing into pajamas, brushing your teeth, etc.) and order should remain essentially the same.

Story time also poses a challenge for a lot of parents. Kids love to ask for just one more and can get pretty upset if they're told no. To help stop that, parents can try a couple things. First, when working with youth, one common theme is to keep expectations clear and consistent - the same carries over for children. Tell them up front that there's only time for one story and stick to that rule. In addition, Momtastic suggests using a timer to make it clear when story time is over, or a digital clock for kids who can recognize numbers.

Most importantly, remember kids are people. Bedtime can be exhausting, especially when kids make a run for it. But it'll only get worse if children feel they have absolutely no control throughout the entire process. As Momtastic reported, children love having a sense of control and they can still have that in bedtime. Give them the opportunity to make small choices, like deciding what book to read or what pajamas to wear. And no matter what, stick with the routine.

More Like This
Banana Boat Sunscreen Has Recalled Products That Were Found To Contain Benzene
New York Can End Religious Exemptions to Vaccine Mandates, Says A Federal Appeals Court
Can You Have Sex With Placenta Previa? Experts Explain
Everything Parents Need To Know About Monkeypox