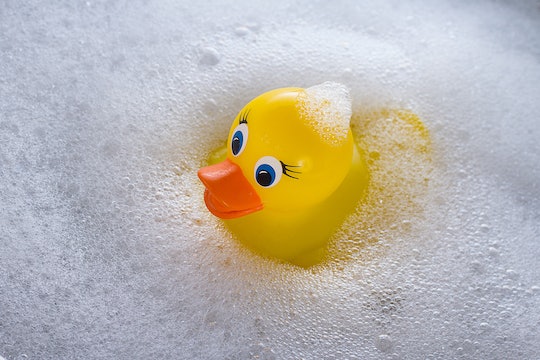 Your Kid's Rubber Ducky May Actually Be Full Of Bacteria, New Study Finds

Ever since Ernie serenaded his rubber ducky on Sesame Street back in 1970, reaching number 16 on Billboard’s “Hot 100 Singles”, the little bathtime companions have celebrated increasing popularity. But some might wonder: how much can a toy that sucks up bath water without actually getting cleaned be trusted? Those worries are perfectly valid, as new research has found that your kid’s rubber ducky may be harboring nasty bacteria.

In hindsight, creating an un-openable toy designed to float in and suck up dirty bath water probably wasn't the most hygienic idea. The study — conducted by the Swiss Federal Institute of Aquatic Science and Technology, ETH Zurich, and the University of Illinois — noted that bathroom conditions are known to promote bacterial growth. Bathrooms typically have moderately high temperatures and increased humidity; just imagine all the steam that collects on mirrors and walls with very few places to go.

The study didn’t limit itself to just looking at rubber ducks; the researchers also examined rubber alligators and any bath toy with a similar design and purpose. Scientists studied the inside of the toys by counting the microbes swimming inside the toys, including examining the water released when the toys were squeezed and cutting them open to check inside.

When squeezed, four out of five toys contained a surprisingly high volume and variety of fungus, according to The Press Democrat. Up to 75 million cells per square centimeter (0.15 square inch) were affected and, while some like to argue that a little bit of germs never hurt, that’s only true to an extent. Some bacteria are good and we do rely on them to keep our digestive tract healthy, as outlined by Hyperbiotics, but every good thing has its limits.

The researchers noted that the bacteria in the bath toys included Legionella and Pseudomonas aeruginosa, a bacterium that’s often implicated in hospital infections. Opportunistic pathogens like Escherichia coli and Coliforms, Listeria, and Enterococcus were also found, which can lead to infection.

In addition to releasing surprisingly gross water, researchers also found that, when cut open, “all bath toys analyzed in this study had dense and slimy biofilms on the inner surface”. Most of the real bath toys (70 percent) had black discoloration on the inside, which is an indicator of mold growth.

Now, whether or not mold and similar bacteria can be found in your kid’s bath toy depends on four main factors, according to the study. First, the plastic material itself needs to be accounted for, as some favor microbial growth over others. Second, the tap water needs to be examined; different regions will introduce different bacteria, with some discrepancy even found in well versus city water within the same cities. Third, remember that a bath is a bath. It soaks up everything that the child, and entire family, introduces to that tub, which means people need to account for their own personal care products and other human body fluids. Lastly, the environmental contamination and user itself can introduce additional bacteria.

So, does this mean that parents have to throw out their kid’s rubber ducky? Well, it’s complicated. Scientists suggest that using higher-quality polymers to make the actual toy could prevent bacterial and fungal growth, but that change will take time. It is possible to clean these bath toys, if you aren’t opposed to the extra chore.

Researchers noted that most of these problems can be stopped by simply plugging the toy’s hole. If no water can get inside of the toy, then there won’t be an issue with bacteria and mold. But, most of the rubber ducky joy revolves around spraying bath water everywhere.

If plugging the hole isn’t an option, parents can also cut a larger one into the bottom of the toy. They won’t be able to squirt the same way, but according to Offspring, a larger hole will allow air to circulate, reducing the build up of mold. Plus, it’s easier to stick a cotton swab inside and clean out the toy whenever needed.

But, if the extra steps of cleaning rubber duckies and their friends don’t sound appealing, then yes, it might just be best to toss the toy out and replace with another bathtime toy.