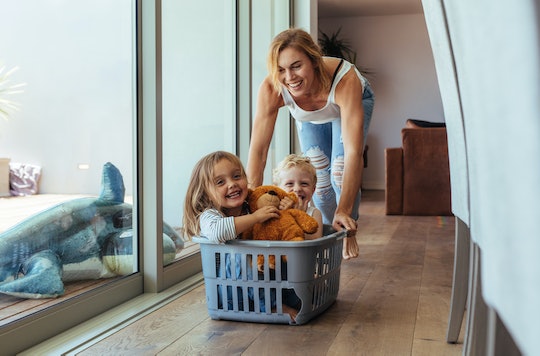 This Is How Your Parenting Style Affects Your Child's Friendships, According To Science

As much as adulting is hard work, being a kid can also be a struggle, especially when it comes to making and keeping friends. Having someone to hang out with at school is pretty much a childhood necessity, after all (what's worse than sitting alone at lunch?), and there are few things more damaging to school-age kids than being bullied. But as much as we may want to help, it turns out that parents can sometimes end up making things worse. This is how your parenting style affects your child's friendships, according to a new study, and it's even more proof that negative parenting strategies can have a long-lasting effect on children's development.

In collaboration with the University of Jyvaskyla in Finland, researchers at Florida Atlantic University took a look at data from 1,523 children in grades one through six, and analyzed both their friendships with others, as well as characteristics of their parents and their parenting styles. Given that the nature of childhood friendships is complex, there are obviously many things that can influence a child's popularity and social skills beyond simply the way they were raised. But, according to Science Daily, the study found that children whose parents show depressive symptoms, as well as those who exert psychological control over their kids, are more likely to see friendship relationships dissolve compared to those who don't.

The study, published in the Journal of Family Psychology, found that "children with clinically depressed parents" had as much as a 104 percent higher risk of seeing the relationship with their best friend end compared to those who don't. And as much as that might not be welcome news to any parents who are suffering from clinical depression, it's also not entirely surprising: experts have long known that a parent's clinical depression can affect their child in a multitude of ways.

A 2009 report by the Institute of Medicine and the National Research Council found, that "untreated, unrecognized parental depression" makes it more likely that children will perform poorly at school, have behavioral problems, be injured and require medical attention, and also experience depressive symptoms themselves, according to The New York Times. Yet it's important to note that that the findings pertain to untreated depression: effective treatment options do exist for depression — with medication and psychotherapy being two of the primary choices, according to the Mayo Clinic — and in addition to being beneficial for the parent suffering, getting help can also help mitigate the negative effects their depression can have on their kids.

But it's not just depression parents should be aware of. The researchers also that parenting style also had an impact on children's friendships, even if depressive symptoms weren't present. Specifically, the team looked at three elements of parenting: behavioral control (aka having a lot of strict rules and monitoring), psychological control (using "shaming and guilt" to influence behavior), as well as the degree to which parents showed warmth and affection towards their kids. And what they found was that, according to Science Daily, "negative parenting characteristics such as manipulative and coercive behaviors" also interfere with a child's ability to make and keep friends.

One outcome that surprised researchers though? While negative parenting made children's friendships more difficult, positive parenting (affection and warmth) didn't actually make friendships any easier. That's pretty disappointing for those of us who may be hoping that offering up plenty of love and support could help our kids better navigate friendship obstacles, but experts do still have some suggestions for parents looking to provide some guidance.

The most popular kids are prosocial — i.e., caring, sharing, and helpful. They also have strong verbal skills and know how to keep their selfish or aggressive impulses in check. Most of all, popular kids are good at interpersonal skills: empathy, perspective-taking, and moral reasoning.

While some kids may naturally be better at those skills than others, the good news is that they can also be nurtured and practiced. Dewar's recommendation? Be mindful of how you respond to your child's emotions. Acknowledging their feelings "in a sympathetic, problem-solving way," is a much better bet than downplaying how they feel, or punishing them for feeling angry or sad (children are better able to learn emotion regulation and self-control — two important social skills — when parents are accepting and empathetic).

Parents can also specifically teach children things that may seem intuitive but aren't, like social etiquette (not interrupting, or asking questions instead of only talking about themselves), and reading facial expressions (allowing them to better understand non-verbal social cues). And if your child isn't naturally a social butterfly? Dewar's suggestion is to encourage cooperative play over competitive games until they get better at navigating social situations (children are more likely to get along when they're working together).

Parenting is always hard work, and no one wants their child to be the odd one out, or the one always picked last for the team. But while figuring out how to fit into the social hierarchy is something our kids ultimately have to do on their own, it's valuable at least to know that there are ways that we can avoid making that process more of a challenge. And while it's still kind of a bummer to know that our unconditional love and cuddles can't protect our kids from social bumps and bruises, they can, at the very least, help soften the blow.