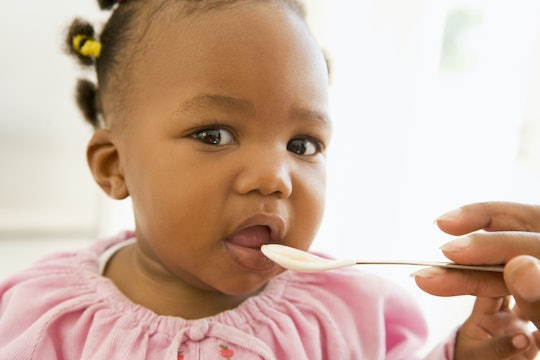 Toddlers Who Are Fussy Eaters Will Turn Out To Be Just Fine, New Study Says

Everyone knows this kid: won't eat anything but chicken nuggets and Pop-Tarts, makes dramatic gagging sounds at the mere sight of broccoli, the foods CAN. NOT. TOUCH. Heck, I was this kid. But if any of this sounds familiar to you, don't fret. Your picky eater is going to be just fine. A recent study determined that fussy eaters generally grow up to have a healthy weight, regardless of if they go through some periods of skinniness. And there's some steps you can take to fight off that fussiness.

The study, conducted by Dr. Caroline Taylor and Dr. Pauline Emmet of the University of Bristol, looked at 1,200 children between the ages of seven and 17 — 300 of whom were labelled picky eaters as toddlers and 900 who were not. They determined that the fussy eaters grew at a normal rate, with over two thirds of them never being underweight, according to the Huffington Post UK.

The team also looked at the "Children of the '90s" study in an attempt to determine what causes food fussiness in children. They determined that fussiness could be related to how old kids are when introduced to "lumpy foods," as well as parental attitudes towards their children's nutrition, HuffPost UK reported. Lumpy foods here are those with chunks in them, or not completely pureed.

Parents who introduced their children to lumpy food after they were 9-months-old and who reported feeling anxious about their children's diets at an early age were more likely to have kids who were picky eaters. According to their findings, 50 percent of fussy-eating toddlers had mothers who were greatly concerned over their child's eating habits.

Introducing lumpy foods to children can be tricky sometimes. Romper spoke to Jill Castle, a pediatric nutritionist and the author of The Smart Moms Guide to Starting Solids, who explained to us: "Lumpy purees have been a traditional next step from smooth purees. It’s an option, not a 'have to.' Some babies skip this step and go straight to chopped or finger foods. Lumpy purees may be a confusing sensory experience for babies, so don’t be concerned if your baby wants to skip this step."

Heinz for Baby recommends starting with small and soft lumps in a thick puree, like sweet potato or pumpkin, as harder lumps like peas will be too much in the beginning and could pose a choking hazard. Mashed soft foods, like bananas and avocado, work well for first small/soft lumps as well. Along with staving off fussiness, Heinz for Baby reported that the chewing required for small, soft lumps in food encourages tongue movement that facilitates talking down the line. And as teeth aren't required for soft lumps, there's no need to wait for them to start cutting teeth to introduce these sorts of foods.

Another good way to work lumpy foods into your child's diet is to let them play with their food, according to Sasha Watkins, who is a registered dietitian with experience in pediatric nutrition, and a director of The Food Coach Ltd, a London-based nutrition and dietetic consultancy. When writing for Child Centre, Watkins said:

Let your baby play with her food if she wants to. Let her have some messy playtime away from the table. It’s a good way for her to explore the feel of different textures with her fingers as well as her mouth. Don’t discourage her from mouthing her toys, as it’s one of the ways that your baby learns to chew.

Due to the results of the study, Taylor has three recommendations for parents: introduce lumpy foods before nine months, eat with your child, and try not to stress out if they are picky. She also stated that parents should feel reassured that “the fussy toddler they may be faced with today can grow up with a good healthy weight and height, although a few may have periods of skinniness”.

Creating a positive mealtime environment can make eating less stressful for everyone. If your child is being picky, Family Lives recommends taking some deliberate steps to establish a good routine. For one, have structured meal-times that aren't rushed, and don't talk about the foods your children are or are not eating. Additionally, let your children see that you enjoy eating healthy foods so that they will be interested in trying them. Taylor and Emmett found that eating the same foods as your children, at the same time as them, helped to prevent pickiness.

All of these steps can help to get your little one to branch out. But, fortunately, the team also determined that fussiness doesn't last forever and children generally turn out fine. So, don't stress, momma.

Editor's note: This article has been updated to clarify how and when lumpy foods can be introduced to babies, with expert commentary from pediatric nutritionist, Jill Castle.