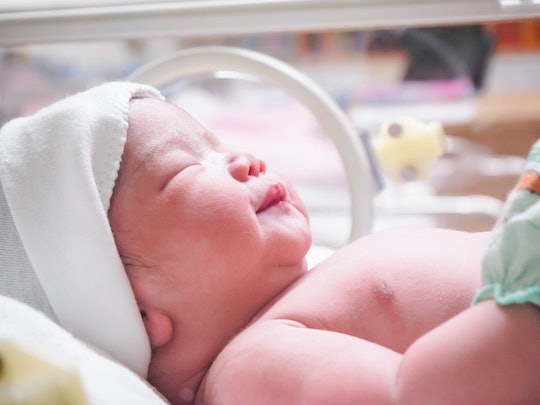 Here's When Your Risk Of Premature Birth Is Lowest, According To Science

Every year, an estimated 15 million babies are born prematurely (before 37 completed weeks of gestation), and that number is only on the rise, but a woman's risk of premature birth is lowest in her early 30s, according to recent research that analyzed more than 165,000 pregnant women.

This study provides useful findings, considering that, according to the World Health Organization (WHO), complications linked to preterm birth are "the leading cause of death" for children under 5 and were "responsible for approximately 1 million deaths in 2015." About 8 percent of babies are premature, the NHS reported. But mothers in their early 30s have the lowest risk of delivering prematurely, according to the new study published in the journal Plos One.

The researchers from Canada and France evaluated the records of 180,000 pregnant Canadian women and narrowed the list down to 165,000 after removing women who've carried more than one baby. The results found that the likelihood of giving birth more than three weeks early significantly increases after women surpass the age of 40 years old — the risk is more than 20 percent higher than those in their early 30s. Likewise, the risk is also slightly higher for women under 30, and the researchers speculate that the reasons may include higher drug and smoking rates and the fact that younger mothers are most likely to be in their first pregnancies.

Because there's been a steady increase of women giving birth over the age of 40, premature birth is a primary concern. Healthline’s State of Fertility Report 2017 found that more than half of millennial women and men are delaying parenthood for career security and financial reasons. In fact, more women are working than ever before, and more women are working past the age of retirement than ever before, too, according to TIME. So they're working harder and longer which means that, naturally, they're letting family plans take a back seat.

Still, even though they're waiting longer to have babies, more women are starting families compared to 10 years ago, according to a new analysis of U.S. Census Data from the Pew Research Center. Overall, women have an average of 2.07 children during their lives, which is up from 1.86 in 2006, the lowest number on record, according to the analysis. As of 2016, a total of 86 percent of women ages 40 to 44 years old are mothers today, compared with 80 percent in 2006.

But if every single woman waited for the perfect moment to finally start a family — "a mythical point at which she is financially secure, professionally established, at the peak of reproductive health, full of folic acid, entirely sober and the ideal healthy weight," the birth rate would plummet, Justine Roberts, founder and chief executive of the social networking site Mumsnet told The Guardian.

While women are policed enough about how and when they should start families, it is helpful to know the risks involved at any age. The signs of premature labor can indeed be similar to the signs of labor that starts at full term: contractions, period-type pains, a "show" (when the plug of mucus that has sealed the cervix during pregnancy comes away and out of the vagina), the water breaking (rupture of membranes), and backaches, the NHS reported.

The solution to premature birth lies within feasible, cost-effective care, according to WHO. This includes care during birth and the postpartum period for both the mother and her baby, provision of antenatal steroid injections, kangaroo mother care (in which the mother carries her baby with skin-to-skin contact and frequently breastfeeds), and antibiotics to treat infections in newborns.

Being aware of your risk factors can only make you and your future baby safer.