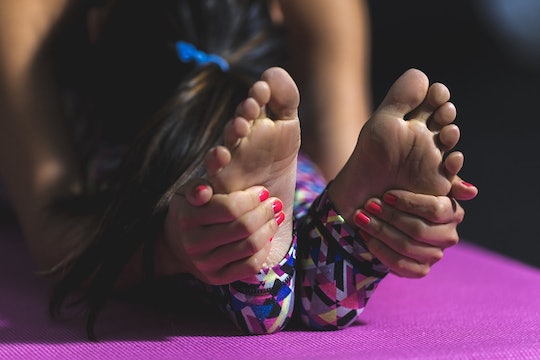 Your Yoga Mat Could Be Hurting Your Chances Of Getting Pregnant, Science Says

Dealing with fertility issues can be one of the most stressful and maddening experiences for a person or a couple to go through, with the strict attention to cycles and sometimes even IVF treatments. Disappointment and frustration and despair over what the heck could possibly be going wrong oftentimes color the process. Now, researchers have identified one possible culprit for yet another negative pregnancy test. It turns out that your yoga mat could hurt your chances of getting pregnant. But take a deep breath in and a let a long breath out, because there are steps that women can take protect themselves from the common chemicals that are bad for fertility.

It's probably a good idea to get the bad news over with first, though. The organophosphate flame retardants (PFRs) in yoga mats are actually common chemicals in all sorts of everyday objects, such as sofas, computer cases, and car seats, according to The New York Daily News. And researchers from the Harvard T.H. Chan School of Public Health detected these chemicals (TDCIPP, mono-ITP, and TPHP) in 80 percent of the women undergoing IVF treatment whom they studied between 2005 and 2015. The findings that the researchers ultimately published Friday in the journal Environmental Health Perspectives were striking.

Basically, the women — all of whom were undergoing IVF treatments at the Massachusetts General Hospital Fertility Center — with higher concentrations of any of these PFRs were 10 percent less likely to achieve a successful fertilization through IVF, according to a press release. They experienced embryo implantation 31 percent less of the time than their counterparts with lower concentrations of the chemicals in their systems. Most notable, however, was the difference between the two groups in the likelihood of having a clinical pregnancy with a heartbeat at the ultrasound (41 percent less) and an actual live birth (41 percent less).

It all sounds pretty scary — and, most unsettlingly, a little uncontrollable. Tech Times reported that flame retardants are sometimes mixed into the base of products, and that they can eventually end up as dust outside the foam mattress pad or yoga mat in which they were originally contained. These flame retardants have been known to disrupt the thyroid and sex hormones in animals, according to HuffPost, and it's possible that the same thing could be going on with humans. That's obviously pretty disturbing for anyone who desperately wants to get pregnant but, for whatever reason, can't.

Still, there's hope. Study author and environmental epidemiologist Courtney Carignan told HuffPost that it could be a good idea to invest in furniture with either barrier technology or it made of fabrics like leather or wool, which are naturally flame resistant. Getting rid of carpeting that may contain PFRs could also be a step in the right direction. Those who may not be able to get new furniture or make other big changes to their homes should wash their hands often. And when it comes to that yoga mat? Try switching it out for one that's chemical-free.

Researchers opted to study women undergoing IVF so they could track each stage of the process, but they believe that their findings are applicable to the population more generally as well. This is the first study of its kind to detect the link between PFRs and infertility, so more research is in order.