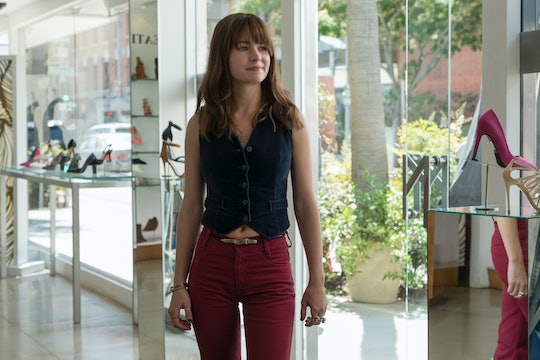 You're Not A Feminist, You're An A**hole

There is a certain type of female character that's emerged in the past few years. It's a variation on the woman behaving badly trope popularized by movies like Bridesmaids and shows like Broad City, in which ladies swill booze and smoke pot and spew profanities and have sex with multiple partners without facing any immediate consequences. The trope knocks women off their pedestals by depicting them as just as loud-mouthed and ill-behaved and amoral as men are, and is ostensibly intended to be progressive — and to a certain extent, it can be. (At the very least, in the case of Bridesmaids and Broad City, it can be very funny.)

Where the trope falls short is when amorality is viewed as a form of feminist self-empowerment. This is where Sophia Marlowe, the protagonist of the new Netflix series Girlboss, comes in.

Girlboss is the rags-to-riches story of Sophia (Britt Robertson), an aspiring fashion impresario who goes from selling shoes at a mid-level store in San Francisco to living a fabulous life as the fabulous owner of her own fabulous company reselling fabulous vintage embroidered jackets and flared denim pants — a side hustle that, as those familiar with the hagiography of female corporate leaders knows, eventually blossoms into the online clothing company Nasty Gal.

Sophia is, in a word, an a**hole. In the first episode alone, she exhibits countless instances of selfish or outright antisocial behavior — causing traffic jams, stealing expensive trinkets and carpets (in fact, she steals, like, a lot throughout the entire series), rolling her eyes at her boring old middle-aged boss and then stealing her tuna sandwich because she has the gall to dress dowdily and tell her to get off eBay and do her job, and also because she just doesn't give a f*ck.

Through the lens of Girlboss, Sophia's bad behavior is supposed to be viewed as a reflection of her refusal to conform to social mores, an instinct that leads her on the path to self-empowerment as the owner of her own vintage clothing brand. "I try to make her as honest as possible, and in that honesty, show the other side — her vulnerability," Girlboss creator Kay Cannon told Romper's Allison Piwowarski in a recent interview.

Ultimately, however, Sophia comes off less like a go-getting young feminist who has found her way to a seat at the table and more like an entitled brat, running underneath the table and tying her fellow diners' shoelaces together. In short, she comes off like an asshole.

The fact that Sophia is unlikeable is no crime in and of itself: in the age of prestige television, unlikeability is considered a badge of character development, placing Sophia in the same tradition as a Tony Soprano or Walter White, an antihero with big blue eyes and a sweet-ass vintage jacket. In this sense, the character is ostensibly an heir apparent to Girls' Hannah Horvath or the titular character in Amazon's Fleabag or Charlize Theron's Mavis in the underrated Young Adult: a female character whose lack of morality is precisely what makes her both funny and relatable, as well as a welcome departure from the prim, virtuous, self-consciously quirky female protagonists of the past.

But where Sophia and Tony Soprano differ is that Sophia is based on an actual person: Sophia Amoruso, the CEO of the fast fashion chain Nasty Gal, who built what Lena Dunham once deemed a "movement" of corporate feminist self-empowerment with her bestselling memoir, Girlboss. Amoruso has been lauded as a Sheryl Sandberg for the millennial generation, a feminist leader whose business savvy and give-no-f**ks mien inspires women in the workplace "to be their best selves and to define success for themselves," Amoroso recently told Buzzfeed.

Yet to hear employees of Nasty Gal tell it, Amoruso is far from an advocate for women in her own workplace. She has been accused of illegally firing at least three employees after she found out they were pregnant, in one case terminating an employee when she was 36 weeks pregnant. She has also been accused of building a toxic work environment for her predominantly female employees, and of ignoring her day-to-day business operations in favor of building her own personal brand. (A spokesperson for Nasty Gal did not respond to Romper's request for comment.)

To be fair, Amoruso is far from the only woman who has incorporated the tenets of feminism into her public image, while simultaneously allegedly rejecting them in practice. Last month, the website Racked reported that former Thinx CEO Miki Agrawal, who has styled herself as a go-getting feminist "She-E-O," paid her female employees sub-standard salaries, and even allegedly sexually harassed one of them. Most notably, Ivanka Trump also styled herself as an advocate for working women, touting her feminist credentials before becoming a salaried member of her openly misogynistic father's administration.

Through the lens of these accusations, seeing Amoruso's antisocial behavior lionized for a generation of millennial women on Girlboss is bad enough. But having her labeled by such prominent figures as Lena Dunham as a feminist hero is not just to render the term "feminist" meaningless. It is to dismantle everything that the feminist movement has accomplished and come to signify, to the point where feminism means nothing at all.

The problem arises when economic self-empowerment becomes synonymous with liberation, when the ability to buy a thrifted white leather jacket for a low price at a store in the Haight is somehow tantamount to undoing centuries of oppression.

Thanks to women like Amoruso, as well as women like Agrawal and Trump, a candy-colored (call it "millennial pink"), shellacked version of ultra-corporate feminism has emerged in recent years, one that seems tailor-made for young women in their teens and early twenties, who genuinely believe in gender equality and female empowerment but are more likely to quote Roxane Gay than Judith Butler. (And, to be fair, Gay is a better writer.)

In itself, there is nothing wrong with pushing economic self-empowerment as a tool for gender equality, provided that narrative is promoted by and open to a diverse range of women (which it often isn't — both Amoruso and Trump are white). The problem arises when economic self-empowerment becomes synonymous with liberation, when the ability to buy a thrifted white leather jacket for a low price at a store in the Haight is somehow tantamount to undoing centuries of oppression. And even more problems arise when the pushers of this ethos are accused of behavior that is insensitive at best and outright hostile to women at worst.

When feminism becomes interchangeable with both having a lot of money and treating the women around you as if they are traffic cones on your own path to success, to be blithely knocked away at a moment's notice, then feminism doesn't just become meaningless — it becomes toxic. Worse, when millennial pink feminism is propagated by such thought leaders and influencers as Amoruso and Trump, it has the potential to spread beyond the realm of boardrooms and conference rooms, becoming widespread.

When feminism becomes interchangeable with both having a lot of money and treating the women around you as if they are traffic cones on your own path to success, to be blithely knocked away at a moment's notice, then feminism doesn't just become meaningless — it becomes toxic.

While Amoruso, Agrawal, and Trump are all powerful women of means who use gender politics as a self-branding tactic, assholism-as-feminism is not limited to the corporate world. If you know where to look, it's not hard to see feminism used as a justification for selfish or even outright rude behavior: in the woman who treats her friends callously (as Sophia does when she begrudgingly gives a friend a Snickers bar in exchange for decorating her launch party pro-bono), the female boss who hires men over women, or the clique that gangs up on an unsuspecting female target on social media. When editor Elizabeth Bruenig revealed she was a feminist who is anti-choice, many respectfully criticized the label, arguing that a woman who dictates how other women use their bodies is not a feminist at all. But those voices were drowned out by the self-identified feminists on social media who attacked Bruenig for her views, calling her an idiot and, well, an a**hole.

If we are earnest about starting a revolution in the age of Trump, a man who uses dog-whistles and double-speak to promote his inconsistent agenda, it's time that we, in contrast, start using our own words wisely in contrast. A woman who actively works for the empowerment of other women is a feminist. A woman who treats other women poorly for the sake of her own empowerment is an asshole. And no best-selling memoir or snazzy embroidered jacket should be able to convince us otherwise.