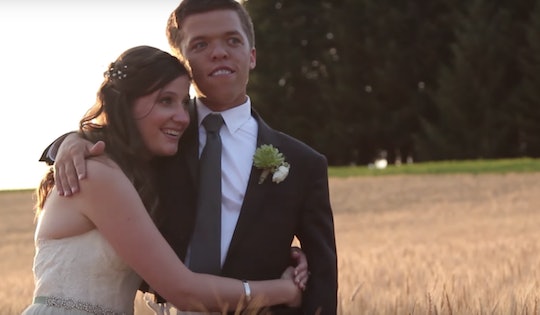 The Little People Big World family just grew a little bigger, now that Roloff family welcomed its first grandchild into the world on May 12. Zach Roloff and his wife Tori were thrilled to announce the birth of their son, Jackson Kyle. The first time parents appear to be up to their eyeballs in diapers as they settle in to life with their newborn, having little time to post to either of their Instagram accounts; the last post for each of them was over Mother's Day weekend. Zach Roloff's Instagram feed, while lacking in any new photos of Baby Jackson, do show a man who is totally head over heels for his wife, Tori.

Roloff hasn't always been a frequent poster on his Instagram account. Since joining the photo sharing platform in September 2013, he has only posted just under 100 photos. Even in his first Instagram post, he joked that he knew he was late to the Instagram game, even three and a half years ago. Even though Roloff would go for long stretches without posting anything, his posts have ticked up in frequency as Tori's pregnancy progressed. There's definitely one beautifully common theme to all of his photos: His wife Tori, posing with his wife Tori, or shots of their dog, Sully.

In the age of "social media influencers," Roloff's Instagram is a refreshing change of pace. His photos, with some definitely composed, don't feel manufactured by the TLC Network for the sake of their reality show. The look of love and devotion they have for each other just pours out from each photo and each just feels so genuine. His feed never really gets political or strays far from the comforts of his home at Roloff Farms in Hillsboro, Oregon, and it's just really adorably sweet.

Zach and Tori first met while working at the Roloff Farms pumpkin patch, according to a transcript from the TLC special, Little People, Big World: Zach's First Love. The two also share a love of competitive soccer together. The couple got engaged in 2014, when Zach proposed to Tori in an open field in April of that year. The two got married in 2015 in a stunning outdoor ceremony at the Roloff family farm.

As fans have watched Zach and Tori fall in love, get engaged, get married, and go through their first pregnancy together, they can now look forward to hopefully some more photos of Baby Jackson — maybe once they get their first full night of sleep since he was born. Seriously — this is one wicked cute couple and Zach's Instagram is a perfect way to bring a legit smile to your face. It's obvious they are going to rock it as parents with as much love and joy as Zach's Instagram shows off of the two of them.