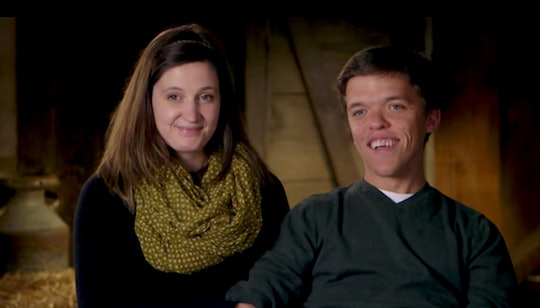 Little People, Big World's Zach and Tori Roloff may have been beyond excited to be expecting their first child together, but now that their son, Jackson, is finally here, it sounds like life as new parents is even better than they expected. In an exclusive interview with People Tuesday, the couple shared new family photos and discussed common new-parent topics, like breastfeeding and sleep-deprivation. But they also revealed that, like Zach, baby Jackson was born with a form of dwarfism called achondroplasia. The couple waited to share their son's diagnosis publicly until after his birth, but Zach Roloff's quotes about dwarfism show that he's going to be a great role model for his son.

Zach and Tori told People that they'd learned about Jackson's dwarfism during their 34-week ultrasound, and that they'd also known ahead of time that Jackson had about a 50 percent change of inheriting the genetic condition from his father. Although Tori had expressed some concern about the possibility in the season premiere of the Roloff's reality show earlier this month, it's clear that the diagnosis hasn't actually bothered her at all. She told People that while they "knew [their] chances of having a dwarf, ... it didn’t matter,” and said, "we just knew we wanted to be parents, however God wanted it to happen.”

But while the impact of the potential diagnosis weighed a bit more heavily on Tori's mind during her pregnancy, it didn't appear to be an issue at all for Zach. In fact, as someone who has lived with achondroplasia his whole life, Zach often reminded his wife that there was nothing to worry about when it came to their son's future.

Unsurprisingly, Zach and Tori's pregnancy is a popular topic on this season of Little People, Big World, and in one episode, the couple discussed the possibility of finding out that their son had achondroplasia. Like many expectant moms, Tori felt nervous about her upcoming scan, as well as about the implications of getting a diagnosis. She explained that it felt "scary" to consider that her baby could have dwarfism, and emphasized that it would likely feel especially scary for parents who weren't familiar with the genetic disorder.

While Zach understood his wife's point, he took issue with the idea that having a baby with dwarfism is "scary." He asked his wife, "What's a better word than 'scary'? Is it 'scary'? Or is it, like, nerve-wracking...?"

It might seem like semantics, but Zach's point is a good one: sure, the unknown might make you feel uneasy, and maybe it's hard to consider that there might be something about your child that you weren't necessarily expecting. But sometimes certain words make things sound worse than they actually are. And it seems like Zach at least feels pretty certain that no one should have to feel afraid to raise a kid with achondroplasia.

He Told Tori That He Didn't See Dwarfism As Being "Different"

During the same episode, Zach made another important point about what it would actually mean for him to have a baby with dwarfism. While to Tori — and to any average-height parent — it's true that achondroplasia would seem like an abnormality, to Zach, having a baby with dwarfism would actually mean that he'd have a baby that would look just like him. And that's pretty special.

When Tori pointed out that “no parent wants to hear that their child is different, no matter what that is,” Zach explained, “OK, but to me, [having dwarfism is] not different. He’s just like me.”

He Pointed Out That Babies With Dwarfism Are Totally Adorable

Given the understandable emphasis on the healthy and safe development of the baby during pregnancy, it can be difficult — not to mention totally distracting — if something goes awry. And even though Zach and Tori knew they had a not-insignificant chance of having a baby with dwarfism, it can still feel upsetting when you don't get the "perfect" pregnancy most people expect to have when they first pee on the stick.

While neither Zach nor Tori have commented on what it was like for them to find out about Jackson's dwarfism, it seems only natural that they may have worried about what it might mean for his future. What it shouldn't take away from though, is the fact that they still totally deserve to celebrate and be excited about their son's arrival — and that they shouldn't forget that, even with his condition, he was still going to be a really adorable baby.

But that doesn't seem like it would have been an issue for Zach. In an earlier episode of the show, Zach and Tori met up with Zach's twin brother Jeremy, and his wife Audrey, for dinner. And when the conversation topic switched to their future family plans, Zach told the group that he wanted "to have a little dwarf baby" and that having "a little dwarf baby might be the cutest."

One very real downside of having a baby with dwarfism though? There's an increased risk of possible health complications. According to the March of Dimes, babies born with achondroplasia can experience further complications like apnea, chronic ear infections, compression of the spinal cord, and hydrocephalus, and it's possible that Jackson might face medical challenges in his life.

But if he does, he'll have a strong ally in his dad. Since Zach himself has had to undergo a number of surgeries because of his own dwarfism, he'll absolutely be able to relate to his son if he has to endure the same. But it also sounds like he hasn't wished that he was born average-height — and most importantly, he hasn't wished for his son to be born average-height either. He told TLC,

In his most recent interview with People, Zach spoke a bit about what he thinks it will be like to raise a child with dwarfism. One difference he anticipates? He'll be a big cheerleader for his son — though he'll still expect him to work hard. He said,

As for what he hopes to teach Jackson as he grows? Zach said that he wants his son to know that "being a dwarf is just part of the whole package of who he is,” and added, "whatever he wants to do in life, we’re going to find a way to help him do it. That’s our job in life now.”

For parents who may not have any experience with achondroplasia, it's understandable that a diagnosis might at first seem upsetting or scary. But what Zach has for years tried to demonstrate to Little People, Big World viewers is that life with dwarfism doesn't necessarily have to be all that different. And now, as a dad to a little boy who also has the condition, he'll be able to show him first hand that there's nothing at all wrong with him. And no matter what challenges Jackson might go on to face in his life, it's clear that he'll always have his dad in his corner for support, encouragement, and understanding.