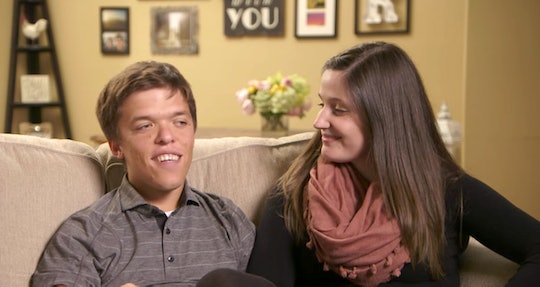 The newest season of Little People, Big World has been a bit of a baby bonanza: Zach and Tori Roloff recently welcomed a baby boy named Jackson Kyle Roloff into the world on May 12, and Zach's twin brother, Jeremy, and his wife are also set to welcome a baby girl later this year. Unsurprisingly, there has been a lot of talk on the show about parenting and all that goes along with preparing to give birth. But even though big changes have been on the horizon, Zach Roloff's quotes about parenting from the show suggest that the dad-to-be was trying his best to take it all in stride.

Four months after their first wedding anniversary in July 2016, Zach and Tori announced their pregnancy in a video message for TLC, and discussed their excitement about expanding their family. Luckily for fans, the couple hasn't shied away from sharing all the details both on the show and on social media — Tori posted regular bump pics on her Instagram account, as well as photos from her baby shower, and pics of Jackson's completed nursery. But though the couple faced some increased uncertainty over the possibility that their son might be born with dwarfism (Zach has achondroplasia, a form of short-limbed dwarfism that his mother also has, according to TLC), it's clear that Zach has really been looking forward to becoming a dad.

He Wasn’t Worried About Possibly Having A Baby With Dwarfism

It's not at all uncommon for parents-to-be to feel nervous about possible complications in their pregnancies, but for Zach and Tori, the risk was a bit more concrete. In the season premiere of Little People, Big World earlier this month, the couple discussed what it's like to know that their child could be born with a form of dwarfism like Zach, and their mixed feelings ahead of a scheduled ultrasound. But while Tori admitted that she thought it was "scary" to consider that her baby could have dwarfism, Zach took a different view.

In the clip, Zach explained that while he said he could understand his wife's fear, he wasn't worried about it. And when Tori said out that “no parent wants to hear that their child is different, no matter what that is,” Zach pointed out that he didn't see it that way, noting, “OK, but to me, that’s not different. He’s just like me.”

Zach did admit though that he definitely wouldn't wish upon his child the same kinds of medical complications that he experienced as someone with achondroplasia, but said it still didn't make him afraid:

In Fact, He’d Love To Have A “Dwarf Baby” One Day

While the prospect of having a baby with dwarfism may have been a bit more worrisome for the couple while they were actually pregnant, in an earlier episode, Zach said that he'd be more than happy to have a baby with achondroplasia.

During a visit to Bend, Oregon, Zach and Tori met up with Jeremy, and his wife, Audrey, for dinner, and when conversation quickly turned to plans for babies, Zach told the group that he wanted "to have a little dwarf baby" — even adding that he thought "a little dwarf baby might be the cutest."

Despite her later concern as a mom-to-be, Tori explained that the prospect of having a child with dwarfism was something that they'd talked about, and she said she knew "Zach would be stoked" if it were to happen. Ultimately though, Tori said their priority was just "healthy, happy babies," regardless of their size.

He Dreams Of Raising His Kids On The Family Farm

Another revelation from their family dinner? That Zach was hoping he and Tori would be able to raise their kids on the Roloff farm, where Zach grew up and where he and Tori held their wedding. Possibly also hinting at his desire for a large family, Zach said, "My dream is to have my dad with four car seats on his [tractor]."

The only issue? Now that Zach and Jeremy's parents are divorced, it's not clear whether they will continue to be able to run the farm together. As Zach explained,

The future of the farm is uncertain. It’s nerve-wracking. We’d have nowhere for our kids to run around.

Zach might have felt totally ready for fatherhood, but what Tori may not have realized was that he didn't exactly have a lot of evidence upon which to base that opinion. In a YouTube vlog post shared by their friends Jacob and Destiney Mueller, Zach admitted that he had never changed a diaper before — a fact which took his pregnant wife by surprise.

When Tori then asked if he really hadn't ever changed a diaper, Zach replied, "No, whose baby would I have ever changed?" And while he didn't seem phased at all by the prospect of having a newborn, Zach did admit that he was a little bit uneasy about what it might be like to have older children. When the topic changed to discussing the Muellers' three kids, Zach said,

Kids are a handful though. They want to ask questions, they’re constantly moving.

Maybe it's a good thing he'll have plenty of time to adjust before Jackson starts running around?

He Thinks He’ll Be The Stricter Parent

No one really knows what they'll be like as a parent before it happens, of course, but Zach's best guess was that he'd probably be more likely than his wife to be the one enforcing the rules.

In an interview with People in November, the newly-pregnant couple discussed what they were expecting from parenthood, and Zach said that while he thought Tori would be "a loving mother hen" to their child, he anticipated he'd be "a fun, hands on dad, but also the disciplinarian."

He may have been excited to welcome his son into the world, but one thing Zach wasn't so eager to experience? Cutting the umbilical cord after delivery — a role often delegated to dads and partners. According to People, Zach and Tori discussed the prospect during a recent episode of Little People, Big World, and though Tori argued that cutting the cord would be "his job," he insisted he wasn't interested, and wondered why "a trained physician" wasn't going to be the one in charge of handling the task.

If he were looking for some confidence-boosting tips from someone else, he hopefully avoided asking his dad. When asked later in the episode, about his own experience cutting his children's umbilical cords, Matt Roloff sounded similarly squeamish. He said,

Regardless, Zach and Tori are clearly in love with their new arrival, and in her most recent Instagram post, the new mom shared a super sweet photo of her son in which she wrote that motherhood "is what [she] was meant to do." Following Jackson's birth, Zach gushed to People that "Jackson is already mastered holding Daddy’s fingers and snuggling with mom,” and added that he and Tori were "loving being parents.” And judging by the way he's talked about prospective fatherhood, that's not at all hard to believe.