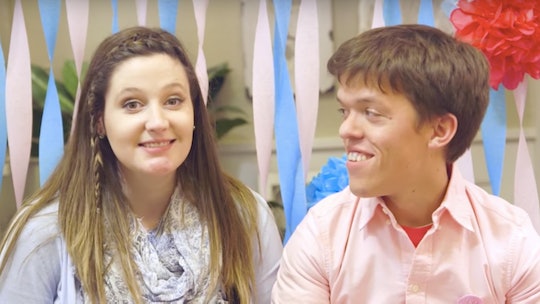 It looks like congratulations are in order for one TLC realty star couple! That's because another Little People, Big World baby is on the way. On Monday, May 13, it was announced Zach and Tori Roloff are expecting their second child, according to People.

The expecting mom took to Instagram on Monday to share the happy news, "Zachary and I are so excited to announce that Jackson is going to be a big brother!" she wrote alongside the main photo of herself, Zach, and their 2-year-old wearing a "big brother" shirt. "We are expecting a sweet baby girl this November! 🎀 Thank you so much for always supporting our family and loving us!" Tori included three other adorable shots, including one of the soon-to-be big brother by himself, and two others of the family posing with a sonogram and the couple holding a sonogram.

Sister-in-law Audrey Roloff was among the Instagram users who shared their excitement in the comments section. "Wahoooooo CANT WAIT FOR THE GIRLSIES TO HANGGGGG😍😍😍😍😍 I’m so happy for you Tori! 💗💗💗," she wrote.

Another Instagram user chimed in with, "OH MY GOSH CONGRATULATIONS YOU GUYS!!! 😍😭"

Yet another person commented, "I love u guys and this baby girl so much already!!! 💓💓💓."

Zach Roloff also shared a pregnancy announcement on his own Instagram account. "Yay!! Tori and I are excited to announce that Jackson is going to be a big brother to a little sister!! #zandtpartyoffour 📸," he wrote alongside a carousel of family images.

The pregnancy announcement probably doesn't come as a huge shocker for Little People, Big World fans. Zach and Tori had hinted at expanding their family in April, after all. “We have plans,” Zach told Us Weekly. “We want a family. I would love four or five kids. I want a little pack. Right now, we’re just kind of [like], if it happens, it happens.”

"It’s just on God’s timing and just whenever," Tori chimed in. "We’re ready for it.”

As ET Online reported, Zach and Tori welcomed their first child — a son they named Jackson — in May 2017

The couple later revealed that like Zach, Jackson also has a form of dwarfism — something they found out when Tori was 34 weeks pregnant — according to In Touch Weekly. Although a pregnant Tori admitted it was "scary" to think about having a child that would be different, she also admitted she would love “whatever pops out," the publication reported. "You have to encourage a dwarf child a little more because it will take them five steps to do what others can do in two,” Zach had previously said. “But I knew, dwarf or not, I was going to parent my child with the mentality that not everyone gets a trophy. You have to earn it.”

A number of Tori's Instagram followers have already wondering about the odds of their second child having achondroplasia — the type of dwarfism both Zach and Jackson have. According to the National Human Genome Research Institute, Tori and Zach have a 50/50 chance of having a child with dwarfism. So their little girl could very well be a dwarf, too. Or not.

Either way, I have no doubt that baby girl Roloff will be incredibly loved. Congrats, Tori and Zach, on your little one on the way!