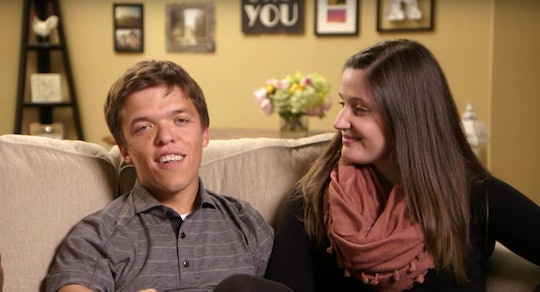 Zach & Tori Roloff Said This Is The Hardest Part Of Being New Parents, & Amen

Any parent can tell you, having a baby overhauls your life. Sleep goes out the window for the foreseeable future and you find yourself more concerned with the wellbeing of your child than you ever could have imagined. Zach and Tori Roloff got real about being new parents in the Little People, Big World trailer and they faced many of the same struggles as any other parents. But almost a year after welcoming baby Jackson, they have adjusted to their new lives.

In the sneak-peek for the Little People, Big World season premiere on Tuesday, April 3, Tori and Zach Roloff shared their experiences as new parents last year. Their son, Jackson Kyle Roloff, was born at 8:00 a.m. on Friday, May 12, 2017. Mom and dad look back on the past year and share that it wasn't easy.

“It’s definitely been a huge adjustment,” Zach says in the video. “I love it so far but those first couple of weeks were rough." His main struggle was one every single parent will understand: lack of sleep. "I’m up ‘til 4 in the morning, trying to put this guy to sleep while [Tori’s] getting some rest," he said. "I don’t do well with little sleep!” Sleep deprivation affects 76 percent of parents, according to the National Sleep Foundation. Fortunately, sleep is a little easier to come by once babies get into a routine.

Tori had her own hurdles to overcome with baby Jackson. And while she described motherhood as "amazing," one part of her journey made life especially difficult:

For me, the hardest part is breastfeeding. It took everything I had not to quit breastfeeding. He had trouble latching, but we stuck it out … Being a mom is really fun but it’s exhausting!

She is definitely not alone in her struggles. A study conducted by researchers at UC Davis Medical Center looked at 418 first-time moms — almost all of whom planned to breastfeed — and their breastfeeding experience. Within three days of giving birth, 92 percent of the participants reported difficulty breastfeeding, according to NPR. Of those who had issues, half of them cited trouble latching.

Like most parents, Zach and Tori also worried about the health and wellbeing of their son, particularly because of his dwarfism. Zach explained in the video that he faced his share of illness. “I’ve had medical issues my whole life because of my dwarfism,” he said, going on to detail his breathing and respiratory illness and multiple ear surgeries. Fortunately, Jackson has been a healthy baby thus far.

The couple's concerns about Jackson's health began while Tori was still pregnant. She told In Touch Weekly that the possibility of Jackson having the same condition as his father was “scary,” and it isn't easy to have a child who is “different.” Of course, Tori added that she and Zach would love “whatever pops out,” and they have kept that promise. As Zach explained to the outlet, it just takes a bit of adjustment:

A year later, things have certainly improved. “Now that he’s interacting more and smiling and almost giggling, it’s fun. Every day is something different,” Tori said in the trailer. These days, the two are focusing on the fun parts of parenthood, like celebrating Father's Day and spending quality time with their extended family. The new season of Little People, Big World premieres on TLC on Tuesday, April 3, at 9:00 p.m. ET.