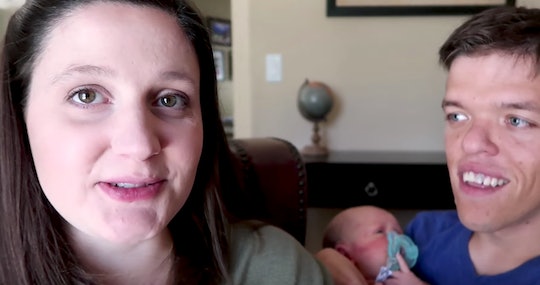 There is something about reality TV stars that make fans become obsessed with their lives. Maybe it is because we're accustomed to seeing them live their lives on screen that we want to know what they do off screen. Like Little People Big World stars Zach and Tori Roloff, for example, who recently gave birth to a baby boy, Jackson. In the three months since then, Zach and Tori Roloff say baby Jackson is just like his father, giving those reality TV fans a much welcomed update on their lives as new parents.

Life is not easy with a newborn baby, especially for first time parents. But Zach and Tori make parenting look incredibly easy. After welcoming son Jackson Kyle Roloff on May 12, the new parents have been adjusting to life with one more and so far, everything sounds great. The couple took to TLC's YouTube channel in a behind the scenes video from their reality show to give fans the lowdown on Jackson's personality, including his likes and dislikes.

At just two months old, Jackson is "for the most part, sleeping through the night," according to Zach (a miracle for an infant of his age). Jackson must really love sleeping, because according to Zach and Tori, he is already snoring. "We both sleep through each others snoring," Zach said in the video. "Like father like son."

Another thing that Zach and Jackson have in common? Their need to feel, um, free. "He pretty much loves being naked and not being restricted," Zach said. "Yep, just like his father," Tori added. Hilarious and true.

But Jackson takes after Zach in more than just his sleeping habits and desire to be clothes free at all times. Shortly after Jackson's birth, Zach and Tori announced that Jackson was born with achondroplasia, which is the most common form of dwarfism, according to People. Achondroplasia is something that affects every 1 in 25,000 people, according to Your Genome, and can be inherited from the child's parents (Zach's mom, Amy, also has achondroplasia).

As for Zach and Tori themselves, they're finding that they're developing their own parenting style. "We're pretty chill [parents]," Tori said in the video. Although they might be chill now, Zach was honest with People in May about his approach to parenting his son in the future. Zach told People:

It sounds and looks like Zach and Tori have everything under control. But now that everything is taken care of, can we please get more photos of Jackson? He is too cute for words.