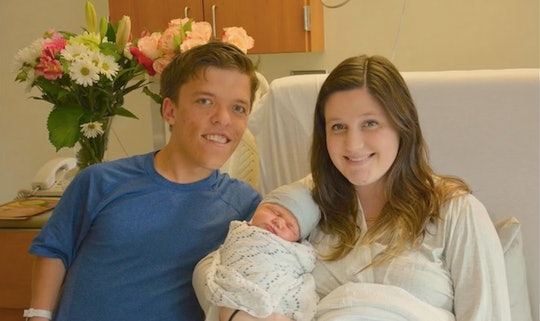 Zach and Tori Roloff — of the TLC network reality series Little People, Big World — have revealed that their newborn, Jackson Kyle Roloff, was born with achondroplasia, the most common form of dwarfism. Jackson was born on May 12, not long before Mother's Day, but the revelation in People magazine is the first time Zach and Tori Roloff talked about their son and his condition publicly.

When Jackson Roloff was born, he weighed 9 pounds and 1 ounce, and was 20.5 inches long. That's right within an average range for most newborns, and someone casually reading about his birth might not have assumed or questioned anything about his health. But fans of Little People, Big World have been curious whether Jackson has the same condition as his father, whose family was featured on the show because so many of them have dwarfism.

According to People, Zach and his wife Tori, who does not have achondroplasia, knew that their child had a 50 percent chance of inheriting the condition. When their son was diagnosed during an ultrasound at 34 weeks, the couple reportedly told their family, but waited until after Jackson's birth to discuss the diagnosis with the public.

Inquisitr reported that Tori Roloff said of the chance that her son could have the disorder:

We knew our chances of having a dwarf, but it didn’t matter. We just knew we wanted to be parents, however God wanted it to happen.

And according to People, Zach is more than up for the challenge of being a dad to his newborn son — regardless of whether he has dwarfism:

You have to encourage a dwarf child a little more because it will take them five steps to do what others can do in two...But I knew, dwarf or not, I was going to parent my child with the mentality that not everyone gets a trophy. You have to earn it.

In Touch Weekly reported that, after having an ultrasound, Zach called his mother and revealed that when they went to the appointment, Jackson's limbs were all "measuring below average.”

According to People, males who have achondroplasia grow to an average height of 4 feet 4 inches and have a normal lifespan. The outlet reported that babies with the condition might have breathing problems and delays in muscle development as well. Zach reportedly realizes the genetic condition will make Jackson’s life more tough, but “I want people to know that he’s just like his dad: being a dwarf is just part of the whole package of who he is.”

The couple have spoken about their worries over whether their child would have dwarfism, on the TLC show and in the media. Zach has seemed mostly worried about his child being bullied — because to him, being a "dwarf" isn't different, but he knows the realities of growing up "different" to other people.

But in the end, the diagnosis doesn't change much for the reality show couple. Tori told People, “I just want him to be a good person.”

And Zach reportedly added that, like any other parent, when it comes to his son, “Whatever he wants to do in life, we’re going to find a way to help him do it."

Sounds like Jackson is getting off to the right start — no matter his diagnosis.