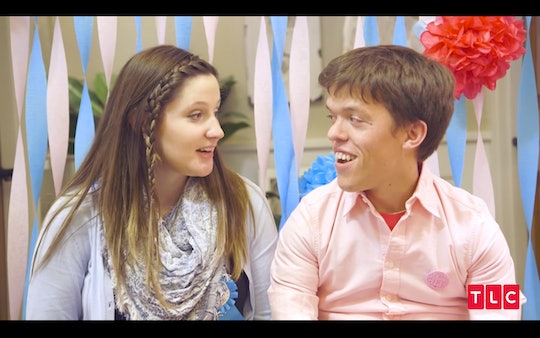 Little People, Big World stars Zach and Tori Roloff welcomed their first child into the world Friday, and the proud new parents celebrated Tori's first-ever Mother's Day Sunday by sharing a photo of their new family of three with the world. According to Us Weekly, Tori announced that she'd given birth to a little boy named Jackson Kyle Roloff at 8 a.m. on May 12, weighing 9 pounds and 1 ounce. A sweet hospital room pic accompanied the post, and in the caption, the new mom wrote, "Mom and Dad are so in love with you already."

The Roloffs announced their pregnancy back in November in a video message for TLC, and in the clip, Zach explained that Tori had revealed the news of her pregnancy to him on a notepad she used to practice calligraphy. Unfortunately, Zach wasn't exactly paying close enough attention to what his wife had written and almost ruined her big surprise. He explained,

[On] the last page, she wrote, 'You're going to be a dad.' And I just skipped right over it. Then she said, 'Hey, you missed it.' And then she pulled it back and I read it, and it was super cool.

The couple kept fans updated on the pregnancy with regular posts on their social media accounts, sharing photos of their son's completed nursery, weekly bump pics and updates, and snaps from Tori's April baby shower at the Roloff family farm in Oregon, where they also married in July 2015.

According to People, Zach and Tori shared in January that they were expecting a boy, and that they'd learned the big news at a gender reveal party in front of 50 of their closest friends and family. But their baby's sex wasn't the only thing the couple was eager to find out about: in the season premiere of Little People, Big World earlier this month, the parents-to-be discussed the possibility that their child could be born with a form of dwarfism like Zach, and shared their mixed feelings ahead of their scheduled ultrasound.

In the episode, Tori admitted that she she thought it was "scary" to consider that her baby could have dwarfism, and explained that "no parent wants to hear that their child is different, no matter what that is." But her husband — who was born with achondroplasia dwarfism — took a different view. While he said he could understand his wife's fear, Zach said that, as far as he was concerned, having a son with dwarfism wouldn't mean he'd be "different" — it would just mean his son would be like him.

The one thing the couple could agree on though, is that the not-so-great part about having a baby with dwarfism is that their child could end up being at a greater risk for health problems than an average-height child. Zach explained that, growing up, he had to have a number of surgeries due to complications from his dwarfism, including having a shunt placed in his head at 18 months old to drain fluid from his brain, and multiple leg straightening procedures. He said,

It's clear from their birth announcement though that the couple couldn't possibly be happier with their son's arrival, and as the first Roloff grandchild, it seems safe to assume that Zach's entire family is likely also super excited. But baby Jackson won't actually have to wait long for a playmate to arrive: according to People, Zach's twin brother, Jeremy, and his wife will be expecting a baby girl together later this year.