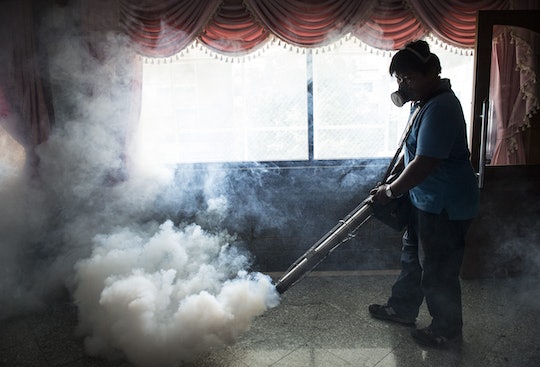 Zika Is No Longer A Global Emergency, WHO Says, & Here's What That Means For The US

In the past year, Zika has posed a major threat to expecting mothers, women wanting to get pregnant, and their children, all over the world. Many people have refrained from traveling to tropical areas in the past year and have taken extra precautions to avoid Zika. And it doesn't look like these precautions will change any time soon. On Friday, it was announced that Zika is no longer a global emergency, according to the World Health Organization, but it doesn't mean that Zika is any less of a threat.

The WHO declared Zika "no longer a global emergency" but that doesn't mean expectant mothers can go rushing to tropical locations and forget their bug spray. Zika is no longer an "emergency" — instead it is now viewed as something that might be here to stay for a while. The WHO ended the emergency, according to The New York Times, because Zika is "now shown to be a dangerous mosquito-borne disease" and can be viewed as an ongoing disease — like malaria or yellow fever — rather than a temporary emergency. Zika was made a global emergency by the WHO earlier this year in February, according to The New York Times. "The evidence is growing, and it's getting strong," Dr. Margaret Chan, the director general of the WHO said at the time. "So I accepted, even on microcephaly alone, that it is sufficient to call an emergency. We need a coordinated global response."

So the global response has happened. But why is Zika no longer a global emergency and what does it mean? It is not exactly the best news — in fact, taking away its emergency status is way worse than being declared just an emergency. It just means that Zika is here to stay — instead, scientists must treat it like a long-term threat to society.

According to CNN, declaring Zika an emergency meant that research and funding was put into place to find out more about the threat it posed to the world. According to Reuters, this allowed for the WHO to find a link between Zika and microcephaly. By taking off the "emergency" label, WHO will now be able to establish a multi-year program and plan to tackle Zika. Therefore, while it doesn't seem like Zika is an emergency due to the label change, it still is huge. Even though mosquitoes don't thrive in colder weather and prefer warm and tropical climates, they haven't gone away forever. A map of places where Zika has been reported throughout the world shows just how prominent the virus is, especially in popular vacation destinations. According to Reuters, the virus has been found in 60 countries and "will continue to spread where mosquitoes that carry the virus are present." The label change does not downplay the severity or presence of Zika — simply tackles it as a problem here to stay.

So what should people in the United States do now? Exactly what they were doing in the summer and are currently doing to avoid mosquitos. People should wear bug spray and take all extra precautions when traveling to tropical climates where Zika has been reported. The CDC said in a statement earlier that people should keep taking those precautions, according to CNN:

ZIKA infection continues to be a serious threat to pregnant women, babies born to pregnant women with Zika, and their families. There is still much to learn about the disease. We need to learn more about Zika and it's associated complications of microcephaly and other brain abnormalities, such as when Zika infection poses highest risk to a fetus during pregnancy, and the magnitude of that risk.

Just because Zika is no longer a global emergency does not mean that the fight is far from over. There is much more that scientists and everyone else is still learning and have yet to learn about Zika, daily. This is only the beginning and it is definitely a start.