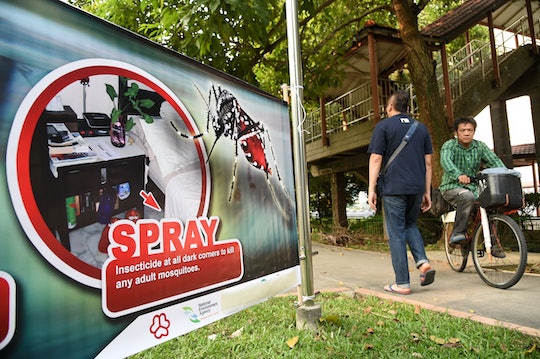 Bad news for people who previously shrugged off Zika virus as a pregnant women's problem: according to a new study, Zika may cause brain damage in adults, too. While it's long been known that Zika can affect brain development in fetuses, according to Bloomberg, it seems that Zika may also be able to infect the neural progenitor cells of adults. Neural progenitor cells are the brain's stem cells. They're associated with learning memory, and they replace lost or damaged neurons.

The study, published in the journal Cell Stem Cell, found that in adult mice infected with Zika, an immune response was detected in the areas of the brain that contain neural progenitor cells. There was also evidence that infection led to cell death in those areas, as well as a decrease in cellular proliferation. "Our results suggest that ZIKV infection can enter the adult brain and lead to neuropathology in mammals," wrote the authors. People with a healthy immune system may be able to fight the disease, but they cautioned that "some immunocompromised humans and even some apparently healthy humans may be susceptible." This was only one study involving a singe strain of Zika, so nothing's written in stone yet, but further studies are needed.

The news isn't completely surprising, as the study notes that similar viruses such as dengue and West Nile are also known to affect the central nervous system. It's still unknown how exactly Zika gains entry to the brain, but this discovery could possibly explain how Zika can lead to Guillain-Barré syndrome. Guillain-Barré is characterized by the immune system attacking the peripheral nervous system, and the study hypothesizes that this could be caused by Zika-infected neural progenitor cells releasing neural antigens, which would then induce the production of antibodies.

In a press release tied to the study, co-author Sujan Shresta, a professor at the La Jolla Institute of Allergy and Immunology, said, "Zika can clearly enter the brain of adults and can wreak havoc." She added that although it's "catastrophic for early brain development ... Its effect on the adult brain may be more subtle." Thanks for those words of comfort, Dr. Shresta! There were 29 cases of locally-acquired mosquito-borne Zika reported in the United States as of Aug. 24, according to the Centers for Disease Control and Prevention, seven of which have led to Guillain-Barré syndrome. Thus far, all locally-acquired U.S. cases have been isolated to Florida.