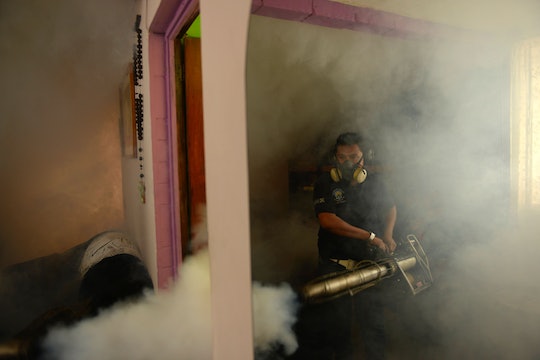 The Zika virus spread has become worse than officials originally predicted. The World Health Organization first began combating the virus in Brazil in May and then Colombia in October. On Monday, the WHO announced projections which indicated Zika virus would spread to all of North America with the exception of two countries. With no concrete prevention or treatment methods, pregnant women should take precautions.

The WHO this week said that transmission was happening faster because mosquitoes were biting travelers, according to CNN. "Aedes mosquitoes — the main vector for Zika transmission — are present in all the region's countries except Canada and continental Chile," a press release read. The organization also stated that the rapid circulation was due in part to Americans’ susceptibility from a lack of exposure to the contagion.

In October, the WHO released a statement detailing the Zika virus’ presence in Brazil and Colombia. Though the New England Journal of Medicine pointed out that Zika virus had been around since the 1940s, there had been a recent uptick in its prevalence since early 2014. In light of this increase, the WHO recommended regions “prepare their health services for a potential additional burden at all levels of health care, and implement an effective public communications strategy to reduce the mosquitoes that transmit this disease, particularly in areas where this vector is present," according to an Oct. 21 press release.

So what is known about how it spreads? According to the Centers for Disease Control and Prevention (CDC), Zika Virus is transmitted through Aedes species mosquito. Though this is its main vehicle, the CDC has also reported that it can be spread from mother to child during pregnancy, though it is rare. In one rare instance, Zika virus was transmitted through intercourse.

As stated, without vaccines or treatments to combat Zika virus, officials are tasked with preventing its spread by limiting exposure. Another way they are trying to reel in the epidemic is by keeping tabs on those afflicted — so it is super important to know what the symptoms are. For starters, the CDC pointed out that 1 in 5 infected with Zika Virus will become sick. Common symptoms include fever, rash, joint pain, conjunctivitis/redness of eyes, muscle pain and headache. Though it is typically nonfatal, what makes Zika virus especially dangerous is that someone can be infected anywhere from a couple of days to a weeks without showing any signs.

But for pregnant women, the disease comes with a whole slew of devastating, irreversible effects to their children, some so alarming that Ecuadorian officials have asked women to forego pregnancy until 2018 (the WHO has recommended restricted travel to those affected countries as well). In Brazil alone, there have been 4,000 cases of microcephaly in newborns— a birth defect that often occurs in infants of women infected with Zika. (Microcephaly is marked by a small head and undeveloped brain.) While there is no concrete link between the two, The New York Times highlighted that microcephaly appears about 150 babies out of the more three million babies born in Brazil each year. So its prevalence is certainly irregular.

Fortunately, there are measures that can be taken to decrease your odds of being infected with Zika virus. As mentioned earlier, there are no available treatment methods at this point. But using repellent and covering exposed skin are two tips officials are offering to anyone living or traveling in areas with Zika-carrying mosquitoes.

The CDC has recommended expectant and new moms also make sure the repellents they using are safe. “Pregnant women and women who are breastfeeding can and should choose an EPA-registered insect repellents and use it according to the product label,” they offered. For now, while the spread of Zika virus continues, it's important for all to take heed.

More Like This
Ireland Baldwin Shares Her Abortion Story In An Emotional TikTok
AAP Says Kids Will Face "Grave Consequences" Now That Roe V. Wade Is Overturned
Can States Ban The Abortion Pill? FDA Rules May Make That Hard
You Can Schedule Your Kid’s Covid Vaccine Appointment At Walmart