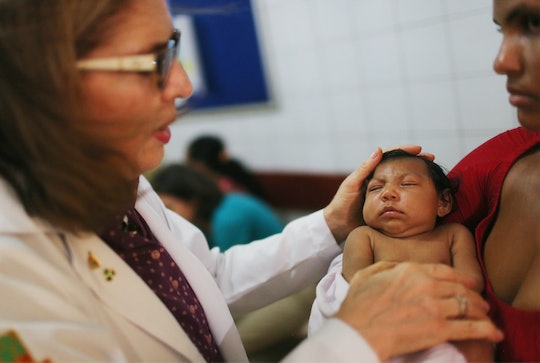 Zika Virus Treatment Guidelines For Babies Aren't A Cure, But They're Still Important

With more and more documented cases piling up around the world, the Centers for Disease Control on Tuesday finally issued treatment guidelines for Zika virus in babies. The new guidelines call for pediatricians to work closely with obstetricians of mothers who have traveled to countries where Zika virus is prevalent. Although there is currently no vaccine or treatment for the virus, the CDC recommended extra close monitoring of ultrasounds to check for birth defects, namely deformed heads, a sign of microcephaly.

Put simply, if a pregnant woman has been exposed to Zika virus, there should be testing all around. The virus is now a "nationally notifiable condition" which means that all cases have to be reported to state and federal health agencies.

Currently, there are no documented cases of Zika virus or microcephaly in the United States, but officials expect it to spread as the weather warms up. Officials have also warned that the Aedes species of mosquito which carries the virus is native to parts of the United States, so everyone — pregnant or not — should be wary of being bitten.

According to the CDC, only about 1 in 5 adults infected with the virus will show symptoms, which range from fever, rash, joint pain, and conjunctivitis. The symptoms last about a week, and death or hospitalization are rare. Overall, Zika virus is most dangerous for pregnant women as the child can potentially be infected in the womb.

In Brazil alone, there have been almost 4,000 documented cases of microcephaly since October. On Tuesday, Brazil deployed over 220,000 troops to go to door-to-door to help spray for mosquitoes, with the government issuing repellant to citizens (which has almost disappeared from Brazilian shelves, according to The Guardian).

There's no cause for panic, but raised awareness, screenings, and testing for the virus will go very far in containing Zika virus and its tragic effects on newborns. The new guidelines might not be a cure, but at least it's something.