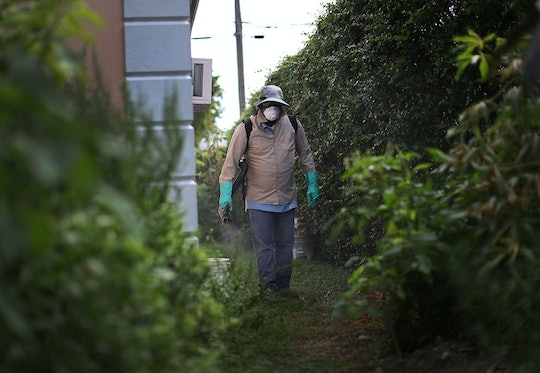 Zika Won't Disappear During Winter In Florida — Or Ever, Really

The spread of Zika across parts of Florida has sounded alarm bells for officials looking for a way to stop the virus and reassure residents and tourists they are safe from a wider epidemic. But what about now that temperatures have started to cool off and winter is right around the corner? Will it get cold enough in the Sunshine state to kill off the mosquitoes responsible for infecting people with Zika? Maybe not. Zika during winter in Florida might have been once considered unlikely, but officials aren't taking any chances.

According to scientific research led by the University of Florida last summer, the Zika virus was expected to die off with mosquito populations as the temperatures drop starting in November, the Miami Herald reported. "I don’t think large-scale epidemics are possible in the U.S. because of window screening and air conditioning,” the study's lead author, Ira Longini, a professor of biostatistics at UF, told The Herald. “We’re talking about small clusters here and there."

But it turns out that predictions might have been wrong. Even during summer months with warmer temperatures these scientists never expected a wide-scale outbreak of Zika in the United States like the one they're fighting across areas of Miami, with mixed results, according to the Miami Herald.

Despite the expectation from these researchers that winter itself will stop the spread of Zika across Florida, state officials aren't taking any chances, and are in the process of preparing to fight mosquitoes even through winter months, the Herald reported.

Speaking in Miami, Tom Frieden, the director of Centers for Disease Control, provided a more ominous outlook regarding controlling the spread of Zika, even through cooler winter months, according to a separate Herald article:

Zika has surprised us. It’s been difficult to predict. It’s had characteristics that we have not seen with other diseases before. What we anticipate will happen is that this season will calm down within the continental United States. We hope that Miami-Dade will stop having cases, but we can't promise that. ... We will see parts of the hemisphere where it will be endemic.

Just this month, new Zika hot zones have popped up in the Miami area. The Wynwood area, once a Zika zone, has been declared free from Zika, but a new neighborhood, Little River, has recently been identified as an area with local transmissions, according to NPR.

The problem is that the mosquito that carries and transmits Zika, the Aedes aegyti is highly adaptable, according to NPR, and could find a way to survive the cooler months in Florida, which are still warm by most standards. For instance, according to AccuWeather, high temperatures throughout November are expected to hover around the high 70s to low 80s in degrees Fahrenheit.

Dr. Michael Callahan is the chief medical officer for the Zika Foundation and said Zika might just be here to stay, permanently. "Unfortunately," Callahan told NPR, "in all of our Zika mosquito control efforts in southeast Asia, West Africa and here in the tropical Americas, once the virus has entered the local Aedes mosquito populations, we've never been able to get it out — totally out."